Award winning Circle of 6 app being localized in India.

NEW YORK: Circle of 6, a smartphone app against sexual assault, has launched in New Delhi, with localized anti-violence resources and language in both English and Hindi. The launch comes at the beginning of Sexual Assault Awareness Month in the United States and the one-year anniversary of Circle of 6 initial launch nationwide. 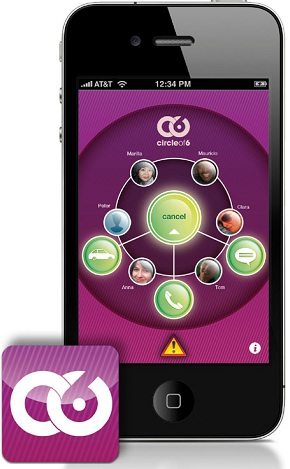 With only two taps, Circle of 6 connects users threatened with possible sexual assault and abuse to a network of trusted friends using GPS technology, texting, anti-­violence resources, and a commitment to support each other. The app is currently being used in 26 countries with over 55,000 downloads worldwide, and the Circle of 6 team is planning to continue its rapid growth both on and off college campuses, with advanced plans for expansion in Mexico and other opportunities being explored, it said here today.

More than 44 million people in India use smartphones. The Circle of 6 app saw download numbers in India rise sharply after the devastating gang rape and murder in New Delhi in December. The team was motivated to act quickly and made the decision to localize the app for greater accessibility.

“Circle of 6 continues to grow at tremendous speed with interest coming in from all corners – college campuses nationwide, and Mexico, South Africa to Hong Kong and more,” said Circle of 6 co-creator Nancy Schwartzman, in a statement. “We are committed to helping citizens around the globe connect with their own safety networks in times of need, often in communities where the police are not a safe option.”

Circle of 6, co-created in 2011 by The Line Campaign, Inc. and ISIS, Inc. – two non-profits dedicated to creating healthier communities – was a winner of the 2011 Apps Against Abuse challenge held by HHS and announced by Vice President Joe Biden and has received awards from the Institute of Medicine and the Avon Foundation for Women.

Featured and used at numerous universities and received significant high-profile media coverage, Circle of 6 is a leading personal safety app steeped in harm reduction principles, and includes educational tool kits for teachers, videos, and other methods of violence prevention. The New Delhi launch has been endorsed by leading Indian women’s advocacy organization Jagori and partners at the United Nations.

“The app’s vibrant colors, user-friendly interface, and addition of Hindi script are designed to make connection easy for people of all genders and sexual orientation to engage and support each other’s personal safety,” said creative director Thomas Cabus.

“I’m a part of the tech community because I truly believe technology can be a force for good. Circle of 6 is exactly such a force, and it’s exciting to be developing new tools that advance safety for people around the globe,” said app developer Christine Moran.

The New Delhi localization of Circle of 6 is available starting for iPhone starting today, with Android version to be released April 15th.