Islam, Crego’s new book defines the character and shape the destiny of a nation. 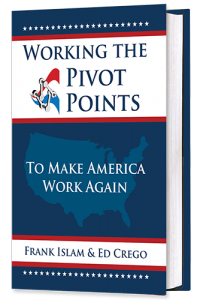 WASHINGTON, DC: Almost immediately after the national elections were concluded, immigration reform again became a topic for conversation and potential legislation.  Illegal immigrants had been at the center of debates and much of the discussion during the Republican presidential primaries.

With their hard-line, hard-headed and hard-hearted stances on things like building a fence to keep illegal immigrants out of the United States and deportation of those who are in the United States, the Republican candidates for the presidential nomination boxed themselves in and built a fence between their eventual nominee and the country’s emerging Hispanic population.  This resulted in President Obama getting 70+% of the Latino vote to Governor Romney’s 30%.

This and other setbacks caused the Republicans to re-evaluate and to begin presenting proposals for dealing with the illegal immigrant problem.    That problem is only the tip of the immigration iceberg, however.

We do need to solve the immigrant issues that were created by too porous a border and a lack of enforcement.  But, as importantly, we need to put an enhanced immigration system in place that contributes to the renewal of America not by building fences but by building bridges that ensure that we continue to attract and retain the highly skilled and talented immigrants who have been a well spring of American growth and development.

America has always prided itself on being a nation of immigrants. The Statue of Liberty provides eloquent testimony to that with its inscription which reads, in part:

Give me your tired, your poor,

The wretched refuse of your teeming shore.

Send these, the homeless, tempest-tost to me,

I lift my lamp beside the golden door.

The achievements and the contributions of immigrants to the nation’s success are legion.  Famous first generation American immigrants, to name just a few, include:  Albert Einstein, physicist who came here from Germany; I.M. Pei, architect from China.  Joseph Pulitzer newspaper publisher from Hungary:   Felix Frankfurter, Supreme Court justice from Austria; Madeline Albright, Secretary of State from Czechoslovakia; Hakeen Olajuwon, basketball player from Nigeria; and, Saint Francis X. (Mother) Cabrini, nun from Italy.  And, the list could go on and on.  Add second generation immigrants to the list, it could go on almost forever.[i]

In spite of these accomplishments and its orientation, however, the United States has not always been the most hospitable place for immigrants.  Over time, nearly every new ethnic group has been viewed with concern.

As Darrell West notes in his seminal book, Brain Gain, near the end of the 19th century and beginning of the 20th century the worries were primarily about those of European stock:  individuals from countries like Scotland, Ireland, Germany and Italy.  By the mid-20th century, they were about immigrants from places like Asia, Africa, Central America and Mexico.[ii]

Border controls and quotas were established early in the 20th century and during the Great Depression, the political leaders almost stopped immigration completely.  So, the focus on immigration is not something of recent origin.

What made matters different since approximately 1980 was the growth of both the legal immigrant pool and the expansion of the illegal pool.  As West points out, this brought about new legislation such as:

In addition, after 9/11, administrative decisions were made to tighten the legal immigration process and to punish those who were here illegally. Between 2000 and 2010, “more than 2 million undocumented aliens” were expelled from the United States.  The Obama administration was spending over $18 billion annually on border security.

Nonetheless, during the 2012 election cycle,   because of the large number of illegal aliens still here – 11.2 million – and concerns about the impact of more aliens entering the country during the jobless recovery after the Great Recession, immigration remained a hot button topic.  Little attention was paid to the significant role that immigrants play today in building the American economy and social fabric.

Vivek Wadhwa highlighted the contributions of these immigrants to the country’s economic success in his 2011 Democracy Journal article, “Our Best Imports:  Keeping Immigrant Innovators Here.”[iv]

According to his 2006 study of more than 2000 technology firms started in the previous ten years, “25.3 percent had a chief executive or lead technologist who was foreign born.”   The percentage of start-ups in various technology sectors is stunning:  semiconductors, 35.2 percent; computers/communications, 31.7 percent; software 27.9 percent; and innovation, 25.9 percent.  Wadhwa estimated that “in 2005 immigration-founded tech companies generated $52 billion in revenue and employed 450,000 workers.”

Wadhwa’s research disclosed that the “vast majority” of these companies’ founders didn’t come to the United States to start businesses.  Over 50 percent of them came to study.  Three quarters of them have degrees in the science, technology, engineering and math fields.

Frank Islam fits this profile of the immigrant entrepreneur perfectly.  Frank grew up in a middle-class family of five siblings in India. Frank left India at the age of 15 to pursue the American Dream.  He got his B.S. and M.S. in computer sciences from the University of Colorado at Boulder.  He worked at two major information technology firms in Washington, D.C., before purchasing the QSS Group, Inc. which, as we noted in the preceding chapter, he grew from a workforce of 1 to more than 2,000 employees and revenues of approximately $300 million in a little more than a decade.

The SBA reports that in 2008 immigrant entrepreneurs generated nearly 12 percent of all business income in the United States.  Darrell West notes that, “Between 1996 and 2008, immigrants were twice as likely as native-borns to start new businesses.”  Based upon his analysis, West concludes “The costs immigrants impose are not zero, but those side effects pale in comparison to the contributions arising from the immigrant brain gain.”[v]

Claudia Kolker informs us that these contributions are not just intellectual or economic in her interesting book, The Immigrant Advantage.[vi]   They are also emotional and social.  Ms Kolker explains that because of supportive customs such as Vietnamese “money clubs” that help people save and Mexican cuarentenas – a forty day period of rest for new mothers many immigrants “tend to be both physically and mentally healthier than most native born Americans.”

There is substantial evidence that immigrants bring talent and gains on a wide variety of fronts.  Given this, it would seem we would have been  embracing those positive contributors and doing all that we can to enable them to use their “immigrant advantage” to enhance the United State’s competitive advantage.  Unfortunately, this is not the case for our current immigration system.

In October 2012, the Kauffmann Foundation released a study which found that the number of high tech immigrant-funded start-ups nationwide has stagnated or declined from 25.3 percent to 24.3 percent since 2005 with an even more precipitous drop in Silicon Valley from 52.4 percent to 43.9 percent.  Dane Stangler, director of Research and Policy at the Foundation commented, “For several years, anecdotal evidence has suggested that an unwelcoming immigration system in the United States has created a ‘reverse brain drain’.  This report confirms it with data.”

The research was conducted by Vivek Wadhwa and compares the findings for the period from 2006 to 2012 to those to his similar study covering the period from 1995 and 2005.[vii]  The study disclosed that immigrant entrepreneurs are still substantial contributors to the economy and that immigrant founders of engineering and technology companies employed roughly 560,000 workers and generated an estimated $63 billion dollars in sales from 2006 to 2012.

It also revealed that while immigrant entrepreneurship has “stagnated” in general and declined for founders from most other countries, the rates of Indian and Chinese start-ups have increased since 2005.   The increase was most notable for founders from India with an increase of 7 percent and a full 33.2 percent of all start-up companies being Indian.

Mr. Wadhwa has written a book which draws upon the research titled, The Immigrant Exodus: Why America is Losing the Global Race to Capture Entrepreneurial Talents.[viii]  Based upon his analysis, he concludes, “The U.S. can reverse these trends with changes in policies and opportunities, if it acts swiftly.  It is imperative that we create a start up visa and expand the number of green cards for skilled foreigners to work in these startups.”

* (The above was Chapter 10:  Immigration:  Don’t Fence Me In from the book Working the Pivot Points – To Make America Work Again [hardcover, published by IMC Publishing; 392 pages; $19.95], co-authored by Frank Islam and Ed Crego).

Islam is a successful entrepreneur, investor and philanthropist with a special commitment to civic, educational and artistic causes. He sold his information technology firm, the QSS Group in 2007, and currently heads the FI Investment Group. He serves on numerous boards and advisory councils including the U.S Institute of Peace, the Woodrow Wilson Center, and the Brookings Institution.  He also serves on various boards and councils at more than one-half dozen universities including Johns Hopkins, American University, and George Mason University.

Crego is known as a “consultant’s consultant.”  He has led major consulting practices specializing in strategic planning, customer focus and organizational transformation. His clients include organizations such as:  Motorola, John Deere, Volkswagen, Marriott, National Automobile Dealers Association; American Medical Association, and the U.S. Departments of Labor, Commerce and State.

Islam and Crego are co-authors of Renewing the American Dream: A Citizens Guide for Restoring Our Competitive Advantage.  They blog for the Huffington Post.

[v] West, op.cit.  See chapter 1 for detailed list and discussion of costs and benefits of immigration.