A celebration of the iconic film’s characters, dialogues, theme. 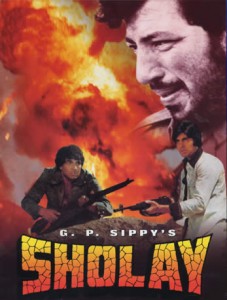 MUMBAI: Ramesh Sippy would have hardly realized back then, that his directorial venture ‘Sholay’, released in 1975, would go into the history books of Indian cinema.

The villain ‘Gabbar’ questioning ‘Kitne aadmi thay’, the loud and guileless heroine ‘Basanti’, the adhesive friendship of ‘Jai’ and ‘Veeru’ and the fearless ‘Thakur’ with no hands, are all a part of legacy that has continued to fascinate generations of film goers.

This year has already marked the film’s comeback with the makers deciding to re-release it in 3D format, after having spent a whopping Rs. 25 crore for the process, with a trailer already out on YouTube.

Now, to capitalize on the frenzy, an initiative has been launched to sell Sholay merchandise, in retail stores and cafes across the country. This, according to the film makers, will celebrate the characters, dialogues and overall theme of the film.

Sasha Sippy, Chairman, Sholay Media and Entertainment, is of the opinion that they will distribute a host of products and mobile applications to cash-in on the never ending craze of the film. The unique feature about it is, the products will not be endorsed by any of its characters or other stars but will rely totally on the film’s power.

The launch will begin with merchandise that will be sold through multi-branded outlets and other retailers. The next stage will be the inauguration of Sholay themed cafes and exclusive stores. Unlike other films who also come up with their line of products for temporary period as marketing strategy, Sholay’s offerings will be a permanent one.

Chitra Johri, VP, Bradford License India, who is helping Sippy for its retail and licensing plans says, “Till now, Sholay inspired dialogues and even products were and are being sold rampantly without realization that it is a licensed property. But now, everything will be legally accountable.”

Salil Pitale, Executive Director, investment banking, media and entertainment, Axis Capital, feels that the success of merchandise will depend hugely on the response to Sholay 3D trailer.

Acclaimed film director Shekhar Kapoor had once said that Indian film industry can now be divided into Sholay BC and Sholay AD periods. There has never been a film told on screen that is so defining.