Downgrading though, from the $12,000 monthly rent they now pay. 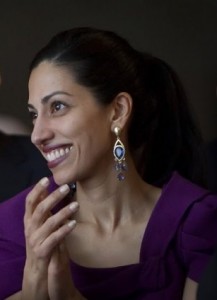 WASHINGTON, DC: Huma Abedin and her husband, disgraced former Congressman Anthony Weiner (D-NY), are in the process of looking for a new place to live in New York City.

The couple was previously renting an apartment that belonged to an influential Democratic donor and good friend of former President Bill Clinton, Jack Rosen. Located in the Gramercy area of Manhattan, Abedin and Weiner were renting the four bedroom $3.3 million apartment for a staggering $12,000 per month, and are now looking to move somewhere cheaper.

Along with their son, two year-old Jordan, Abedin and Weiner are said to be looking at apartments priced at around $8,000 per month.

Abedin has staunchly stood by her husband, and has said she will not leave him despite multiple “sexting” scandals that rocked their marriage last year. When it was uncovered that Weiner had sent sexually explicit text and Twitter messages to Congressional staffers in both 2011 and 2013, Abedin unwaveringly stood by her husband. Many pundits have seen her move as a political one rather than that of a supportive wife, saying that she hopes to milk her connections for something big down the road.

It’s been reported that Abedin has been taking the lead on the house-hunting, asking all the questions and relegating her husband to the background. The half-Indian, half-Pakistani 37 year-old will likely play a major role in the presidential campaign should Hilary Clinton choose to run in 2016; she is currently a high-ranking aide to Clinton, and has been close with the former First Lady and Secretary of State for many years.

Born in Michigan to an Indian father and Pakistani mother, Abedin grew up in Saudi Arabia after her parents moved there when she was two. At the age of 18, she returned to the US to study at George Washington University, where she earned her Bachelor of Arts degree. During her time at GWU, she became a White House intern, and linked up with Clinton during her 2008 White House bid. She and Weiner married in 2010.

Also in 2010, she was listed as one of Time Magazine’s “40 Under 40,” a list of prestigious game-changers around the world under the age of 40. In 2012, she was faced with allegations by Michele Bachmann that she and her family had ties to the Muslim Brotherhood, and even received death threats.