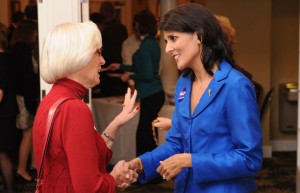 WASHINGTON, DC: A straw poll conducted by the Republican National Committee (RNC) has revealed that South Carolina Governor Nikki Haley is a leading contender within the party to run for President in 2016.

Although it wasn’t mentioned in this specific poll, Louisiana Governor Bobby Jindal has been named pretty consistently over the past year as a potential 2016 nominee. Other names include 2012 Republic running mate and Wisconsin junior Senator Paul Ryan, and Wisconsin governor Scott Walker.

Names were also mentioned for potential Vice-Presidential bids, among them Sarah Palin, who was famously nominated in 2008 by John McCain and was the subject of intense ridicule on the national stage. Former Republican Congressman from Georgia Allen West’s name also popped up, as well as former UN Ambassador John Bolton.

Haley also gave her State of the State Address last week, calling for widespread education reform and a crackdown on standards in South Carolina.

“We can transform education in South Carolina, and we can do it without raising a single tax and without taking a single existing dollar away from a single district,” she said in her address, which transpired in the South Carolina House chambers, adding that “South Carolina’s schools are going to be equipped to compete with any school, in any state.”

Haley talked about providing more money for poorer school districts and putting a stronger emphasis on technology to facilitate education, particularly reading, and said that the total cost of implementing her plan would be in the neighborhood of $177 million.

She also spoke about improving the state’s economy by being friendlier to business. Haley listed changes to the current tax structures, as well as various building projects like bridges and roads, as key components of that plan.

The speech kicks off a crucial year for Haley, who is running for re-election in the 2014 midterm elections this November. If she wins, it could potentially provide a big boost to Haley’s prospects as a Presidential candidate – or, perhaps more likely, a Vice-Presidential running mate.