Will You Marrow Me? – Help save Canadian Moneet Mann’s life, register to donate bone marrow

WASHINGTON, DC: Moneet Mann, a 24 year-old woman of Indian descent who lives in Canada, is putting the word out to south Asians between the ages of 17 and 35 to help her find a bone marrow match so she can battle acute myeloid leukemia. 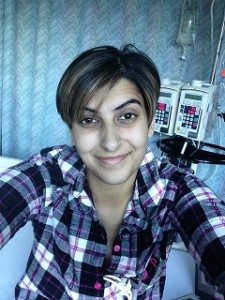 Known as “Money” by her friends and family, Mann was diagnosed on October 11 of last year, while she was a student at Lake Head University in Thunder Bay. Although the chances of finding a bone marrow donor who’s a match can be small for just about anyone diagnosed with such a life-threatening disease, the situation is even more perilous for those of south Asian ancestry, as so few within that ethnic community are registered donors.

The best bone marrow matches are found within one’s ethnicity and age range. So far, only about 229,000 matches have been found for Mann, according to Be the March spokeswoman Rebecca McRoberts. For now, she has gone through six transfusions and is undergoing treatment, but because of her condition, she was forced to withdraw from school, temporarily halting her dreams of becoming a teacher.

Now, an initiative started by Mann’s friends, entitled Will You Marrow Me, has been launched to help get the word out about her condition and find a potential donor. Their hope is that one of the south Asian donors in the national Canadian registry, which only has about 3% worth of donors from that particularly geographic area, will be able to get themselves tested and provide a match for Mann.

RELATED STORY: Nalini Ambady succumbs to Leukemia after years of battling the disease

The lack of south Asian donors has been a problem for several years now; as more and more desis find themselves diagnosed with life-threatening but curable diseases, what ends up causing the most damage is simply the lack of available donors.

Most recently, Stanford University professor Nalini Ambady lost her battle against Leukemia last October, after spending nearly a decade looking for a viable donor. Some even came forward, but ultimately pulled out at the last minute, while one was unable to give blood because of medical complications.

The following video is part of the Will You Marrow Me campaign, and talks even more about Mann, her leukemia, and what people can do to help: