WASHINGTON, DC: A new survey released by the Pew Research Center indicates that the vast majority of Americans look favorably upon finding a way for undocumented immigrants currently within the country to have a legal way of staying, but are far less supportive of giving them a path to citizenship. 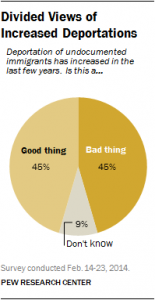 According to the poll, 73% of Americans would like to allow illegal aliens already in the US to stay via some legal means, but only 46% would want them to have a way of applying for citizenship, while only 24% would want them to be allowed to apply for permanent residency.

A separate 24% said that undocumented immigrants should not be allowed to stay in the US, and should be made to leave. Politically, a majority of both Democrats and Republicans want to find a path to legality for illegal immigrants, with 81% and 64% voicing approval for such a measure, respectively.

However, when asked about the practice of deportation – something that President Barack Obama’s administration has done in record numbers in the last five years, with some 400,000 being deported annually – the results were split right down the middle. Forty five percent of those surveyed said that they thought deporting undocumented immigrants was a good thing, while an equal number said it was a bad thing.

But perhaps most importantly, the issue of immigration as a whole has taken a slight dive over the past eight months. In June of last year, 50% of those polled said that passage of immigration reform was an “extremely/very important” item on the political agenda, but that number has now fallen to 49%. Breaking it down further, 46% of Republicans say it’s still extremely/very important, 60% of Democrats feel the same way, and 44% of Independents do as well.

The full results of the Pew Research Center study can be found here.