WASHINGTON, DC: “Shaadi Remix: Transforming the Traditional Indian Marriage,” by Geetha Ravindra, is a dissection of the modern Indian marriage and where it may be headed in the 21st century. The book draws heavily on Ravindra’s career as a litigator and mediator in the United States. 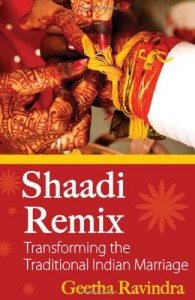 Ravindra has over 20 years of experience with “Alternative Dispute Resolution,” also known as mediation. She currently works in that capacity for the International Monetary Fund (IMF), maintaining bases in both Washington, DC and Richmond, Virginia. She has served as the Director of the Department of Dispute Resolution Services at the Supreme Court of Virginia, held her own private practice for several years, and has taught law at institutions such as the University of Richmond School of Law and The College of William & Mary’s Law School.

In an interview with The American Bazaar, Ravindra explains how the book “Shaadi Remix” came into being, and her own thoughts on the state of Indian marriages, particularly those that are arranged.

Could you clarify the difference between a marriage counselor and a marriage mediator?

They’re very different things. A marriage counselor is someone that couples go to when they want to heal a relationship. They’re not necessarily ready to call it quits, but they want to work things out and move forward in a more healthy way. That’s when counseling comes in. A mediator is very different, and usually comes into play during the dissolution of a marriage. That job is more about dividing assets during a divorce, things of that nature.

What inspired you to write a book about the state of Indian marriages? Was the idea behind this book something you had been developing for a while?

During the time I had my own private practice, which lasted about five years, I did a tremendous amount of family mediation work, both for the criminal and family courts in Richmond, but also for Indian families. So although I was an attorney, the function I was playing was largely that of a mediator.

What brought me to writing this book was that I was truly just amazed by the volume of cases I was seeing, or being asked to help with, that involved members of the Indian community. I had grown up not seeing a whole lot of divorce or separation in the Indian community, so it was a bit surprising and disconcerting because we [as an ethnic community] have less than a 1% divorce rate. I wasn’t really clear about what was happening, and as one of the few Indian women in the country who practice family law, I realized that I was probably one of a very small number of people who was actually aware of all of this.

But even then, I knew that there had to be some kind of reflection on the evolution of the Indian marriage system, because it was just becoming a pattern of problems that I started observing. So I wouldn’t say that it was just one case or one problem I witnessed that set off the idea to write this book; it was more because I started seeing the same problems repeat themselves several times. I wanted to write not only what I was seeing, but also my senses as to why these things were happening, especially since there hasn’t been a whole lot written about social issues in our community.

Why do you think that is?

It’s just still very taboo to talk about Indian couples having problems, or talking about divorce. There’s a lot of social pressure within the community to make relationships work, but what I was seeing during my time as a mediator is that many of these relationships are just flat-out unhealthy and wrong. It’s just unfair and inappropriate to force these couples into staying in these kinds of situations.

So what kinds of unhealthy marriages and relationships do you see in the Indian community?

A case I’m working on right now involves an Indian woman who has a young child with her husband. She’s not allowed to work, she’s not allowed to contact her family in India, and she’s a victim of domestic abuse. She is just beside herself with fear and she doesn’t really have any options. She can’t go back home to India [because] her parents won’t take her, and she doesn’t have the self-sufficiency to just get up and walk out the door. And unfortunately, this is the kind of thing I see far too often.

I’ve seen all kinds of bizarre things. There was a case where the wife supported her husband, despite all kinds of physical and mental abuse, when he went off and had an affair with another woman. He was doing this – essentially, he had a second wife on the side – and his actual wife couldn’t say or do anything. I see things like this, and I think to myself: this is 2014. How can we still allow these things to happen, with such educated people as Indians are, and just be okay with it?

Do most of the cases you see stem from arranged marriages, or do “love marriages” often find themselves in scenarios that you would need to mediate?

It’s a mix. I would say the vast majority of the cases come from arranged marriages, but there are a few of what you’d call “love marriages” or people finding their own [spouses]. But actually, the predominance of arranged marriage cases was why I decided to spend an entire portion of the book talking about the philosophy behind arranged marriages in India – why it’s been done for so long and continues to be done. And frankly, I personally don’t believe that methodology is effective today in discerning compatibility.

It worked at one time, but we were a very different community then; people were less mobile, and parents were the ones providing those connections. But today, a lot of those requirements behind arranged marriages just don’t make any sense. And when you take young people, who have parents that still insist they get married within the community and line up the horoscopes and everything, I just want to ask them, “Do you really think that’s the recipe to a successful marriage in today’s age?”

The good news is that a lot of parents have changed, they have become more liberal, and therefore young people have more and more autonomy. But I still see instances where – here’s an example. There’s one young woman who grew up in the US, and her parents were fairly liberal when it came to her and boys. She dated guys when she was in school, college, so on, and not all of them were Indian, but her parents never really said anything until this one day. They just asked her, out of the blue, “so when you get married, you’re going to settle down with a good boy, right?” And she just goes “what does ‘good boy’ even mean?!”

So what can people who read the book expect to get out of it?

The book basically talks about the history of marriage in India, like I said earlier, and then talks about some examples of the cases I’ve seen over the course of my career where the marriages haven’t turned out so well. I obviously don’t use the real names or anything like that, but I do tell these stories to illustrate some of the problems that Indian marriages can run into, and then I try to offer some advice as to what the reader can do to avoid or get out of these situations. The book also has some resources for people to get in touch with, should they need to.

I didn’t really write the book with a specific age or gender in mind, but it’s something I hope a young adult or a parent can read and take something away from. There might be a couple out there going through problems, thinking about splitting up, and hopefully this book finds its way to them and they try some of the communication techniques in there and it helps them.

Actually, the most surprising thing to me so far has been that non-Indians who have read the book have responded really well to it. Some things about marriage are universal, you know? They find the stuff about Indian marriage very interesting, but they really respond to the material about why marriages fall apart and how can that can be stopped, because a lot of that stuff is common to all ethnicities, not just our own.