‘The Immigration Lawyer Asylum’ is the first in a trilogy.

WASHINGTON, DC: California immigration attorney Shah Peerally has taken to fiction writing: he’s the author of a part thriller and part educational overview of the American immigration system that he hopes will shed light on the problems within the system and stir up interest in solving the most pressing immigration issues currently facing the US. 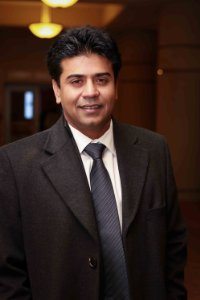 ‘The Immigration Lawyer Asylum’ is the first in a proposed trilogy of novels written by Peerally, who is also a film producer.

Based in Newark, California, Peerally is originally from Mauritius, but his family hails from India. After coming to the US in 1997, Peerally earned his Juris Doctorate degree from the New College School of Law in San Francisco. He later founded Shah Peerally Law Group PC, where he is currently the managing attorney.

Now, Peerally is using his over 15 years of experience in litigation into writing books, which he hopes are both entertaining and educational.

“I want people to enjoy reading the books,” he told The American Bazaar in a phone interview. “But I want people to walk away with some new knowledge. I want to create awareness of the immigration system, especially for non-immigrants who don’t know what that process can be like.”

His new book, “The Immigration Lawyer Asylum,” is about an Iraqi named Ahmad, who comes to the US to flee from the regime of Saddam Hussein. Coming to California on a B1/B2 visa, which he obtained legally, Ahmad is soon detained by immigration officers, and a new nightmare begins for him as he struggles to navigate the complex US system and escape persecution in his home country.

“The story is based on a real case I fought,” Peerally explained. “Some of the facts have been changed, because this is a story, and to protect the privacy of the people involved with the real case. But the majority of it is real, and did happen, and I hope that people will be find it interesting and come away with an understanding of how the immigration courts work.”

After 9/11, Peerally saw a lot of racial profiling targeted at the south Asian minority community. 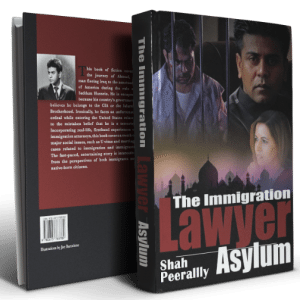 “I fought a lot of immigration cases around that time, and saw how people [within the community] were treated, so I did a lot of legal work and advocacy work for that. I’m still at the forefront of a couple of big movements, mostly to change the H-4 visa so that spouses [of immigrants] can work,” he said.

Peerally said he has mapped out the next two books in the series, each of which will detail a separate immigration issue that he has experience with. He shared that the next book will deal with immigrant processing, while the third novel will act as a “Do’s and Don’ts” guide to immigrants who are new to the country. He also produces short films, several of which are related to immigration, through a self-owned production company entitled Shah Peerally Films.

With immigration reform gaining a lot of exposure over the past couple of years, Peerally hopes that “The Immigration Lawyer Asylum” can find a large mainstream audiences. He hopes to have the next two books published in short order. When asked about his thoughts on the immigration reform issue, however, Peerally was less than optimistic.

“It won’t happen anytime soon,” he said. “[President Barack] Obama can pass an executive order, but the bill itself won’t get passed this year. I’m sure of it. I do think that there is some hope for H-4 visa reform to see some movement [in 2014], but that is also hard to tell right now.”