Rejection rates higher than for any other country.

WASHINGTON, DC: A new study, released by the National Foundation for American Policy (NFAP), indicates that the US immigration authorities may have been discriminatory towards granting L-1B visas towards people of Indian origin, denying several perfectly eligible Indians in favor of applicants from other nations. 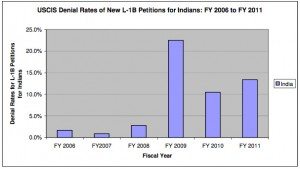 According to the report, the L-1B denial rate for Indian applicants has increased significantly over the past several years. Although country-specific numbers for the years 2012 onwards has not yet been made public, analysis of L-1B rejections from Fiscal Year 1999-2000 through 2008-2009 show that the number of rejections during the latter term was more than the previous 10 years put together.

The report says that, although it’s not terribly surprising that denials have increased across the board, the fact that Indian denials have risen so sharply in comparison to others is disturbing.

“Concern that L-1B petitions for Indians have been singled out might be alleviated if the data showed other countries have experienced similar increases in the rate of denial for L-1B petitions with U.S. Citizenship and Immigration Services [USCIS],” says the report. “However, the data show that while other foreign nationals experienced an increase in denial rates for new L-1B petitions starting in FY 2009, those denial rate increases were far lower than for Indian nationals.”

FY 2008-2009 saw 1,640 denials of L-1B applications from India, while 1999-2000 through 2007-2008 had only 1,341 altogether, a staggering number, to say the least. The NFAP also said that, despite the lack of data for the most recent years, India-based employers said that they are still having trouble securing L-1B visas for their employees, indicating that the trend is continuing. 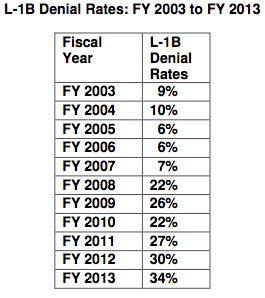 The L-1B visa is a subset of the larger L-1 visa category, which is a non-immigrant visa, unlike the more popular H-1B visa used for Indians coming to the US for work. The L-1 visa allows the holder to stay in the country for a fixed amount of time, which varies from country to country. India’s is five years, with extensions making it possible for a holder to stay as long as seven years for work.

The L-1B visa, specially, is designated for those who have a specialized skill or knowledge, while L-1A is for executives and higher-ups. An L-2 visa exists for the spouses of L-1 holders. Despite their status as non-immigrant visas, the dual-intent doctrine allows for the L-1B visa to be used as a means to obtain permanent residency, or a green card.