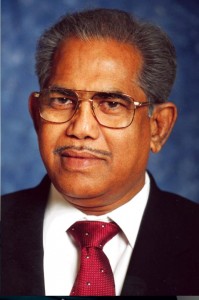 More than a hundred people, among them dozens of his close friends and family members, attended a banquet dinner held in Pillai’s honor at an upscale Northern Virginia restaurant.

“I had numerous opportunities to witness Dr. Pillai’s community activities and public services,” said Cherian, who received the Pravasi Bharaiya Samman in 2008, in his keynote address.

Describing Pillai as someone who doesn’t trumpet his accomplishment, Cherian said the College Park, MD, resident “made a great impact in our Indian American community, especially for our younger generation.”

In his address, Pillai thanked the community for its support. “This Pravasi Bharatiya Samman belongs to you,” he said. “You taught me how to work with people.”

Pillai, who earned a Ph.D. in agriculture, plant physiology and biochemistry from Banaras Hindu University, retired as a chemist from the US Department of Agriculture’s Beltsville Agricultural Research Center.

Building an Indian community center in Washington, DC, has been a pet project for Pillai in recent years. He exhorted the community to continue to work for it and make “our dream a reality.”

In their address, Banik and Wycliffe, who have known and Pillai for decades, praised him for his services to the community.

Minister of Community Affairs at the Embassy of India N.K. Mishra, who lighted the ceremonial lamp, also spoke on the occasion.

The event was sponsored by among others, Balagan Swamy of Balagan Business and Tax Service.