WASHINGTON, DC: Conservative pundit Dinesh D’Souza is no stranger to controversy, and finds himself in the thick of it yet again as wholesale retailer Costco has decided to pull his latest book from its stores’ shelves.

The book, entitled “America: Imagine A World Without Her,” will no longer be sold at Costco outlets across the nation. The reason given by Costco is that sales of the book have been too low to keep giving the book shelf space, but D’Souza and his supporters in the Republican party are crying foul, saying that Costco does not want such openly Conservative literature on its shelves.

That feeling has been compounded by the fact that although Costco chose to remove D’Souza’s book from its shelves, it continues to sell Hilary Clinton’s most recent memoir, “Hard Choices.” Both novels were released around the same time – “America” hit shelves on June 2, while Clinton’s book was released on June 10.

As a direct result of Costco no longer stocking “America,” the book’s sales have shot up on Amazon. The online retailer lists the book as its third best-selling hardcover in the Politics & Government category, and is the 44th highest-selling book overall on the website.

Additionally, after being neglected by the New York Times’ bestseller list, “America” cracked into the top 25 non-fiction titles, ranking #17 in terms of sales on the list’s July 13 edition. 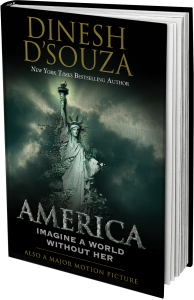 The book is meant to accompany the release of D’Souza’s documentary, which is named after the book, that examines what D’Souza and fellow conservatives see as the decay of America at the hands of liberals. D’Souza’s first documentary – “2016: Obama’s America,” which was released in 2012 – became one of the highest-grossing documentaries ever.

In an interview with Sean Hannity on Fox News, D’Souza said that Costco’s move to stop selling his book is an indication that the left is scared. D’Souza said essentially the same thing earlier this year, when he was indicted on charges of using straw donors to illicitly donate more than the legal amount to a friend of his running for the US Senate in New York – D’Souza plead guilty in May.

The “America” documentary released in theaters around the US on July 4 (naturally), and has so far raked in over $4.4 million. According to Box Office Mojo, that’s enough to rank it as the ninth highest-grossing political documentary ever, but it has a long way to go before it matches the $33.4 million domestic haul that “2016: Obama’s America” brought in.