‘Ro Khanna is the face of Silicon Valley’.

NEW YORK: Sacramento County US House of Representatives hopeful candidate Ro Khanna continues to garner strong support in his bid to unseat the veteran incumbent Mike Honda from his 14-year reign in the House. 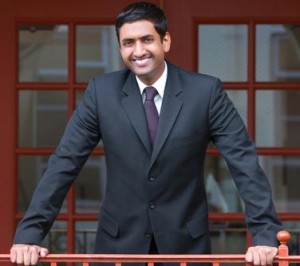 Despite losing by 20 percentage points in the primaries to Honda, Khanna has stayed the course with his Democratic counterpart going into the November elections, by raising far more money than Honda – at least in the primaries which he’s already spent, and is struggling a bit in that area now – and getting key endorsements from tech honchos like Marissa Mayer, the CEO of Yahoo! in Silicon Valley, an area which forms part of the constituency.

Now, following key endorsements by two of the biggest newspapers in the area, the San Francisco Chronicle and the San Jose Mercury News, Khanna, an intellectual properties lawyer and an economics professor at Stanford – his website has the words Economic Growth emblazoned in the background in one of the slide photos – has now been given the nod by The San Jose Silicon Valley Chamber of Commerce’s political action committee (PAC) to beat Honda in the 17th District in California.

It’s a significant endorsement for Khanna, a former Obama administration official from Fremont who has taken a “startup” approach to wooing voters in the heart of Silicon Valley, the only Asian-American majority House district outside Hawaii, reported the San Jose Mercury News.

The endorsement crystallizes the business community’s support, already hinted at by the wide array of tech executives who have donated to Khanna’s campaign, the report said

Jim Reed, the chamber’s vice president of public policy, said members of the chamber’s PAC “looked at Ro and they saw the face of Silicon Valley: international, results-oriented, entrepreneurial, whip-smart.”

“This is the perfect guy to represent our region,” Reed said. “He’s left-of-center on social issues, right-of-center on tech and business issues, and he’s not afraid to make waves.”

He added: “Truly was a case of Ro winning the endorsement as opposed to Mike losing it. Ro’s got so much going for him, and it was his vision, high-tech orientation and depth of knowledge that carried the day.”

Khanna was quoted as saying on the endorsement: “I am a pragmatic, pro-economic-growth, independent-minded Democrat who wants to build a broad coalition and isn’t afraid to challenge the old machine. Honda represents an old, orthodox wing of the Democratic Party.”

Khanna said he’s “committed to working with the chamber and all local stakeholders to create good-paying, middle-class jobs, and help our businesses compete in a global economy.”

Reed, a Democrat who’s term-limited out of office at the end of this year, was reported as saying he’s been thinking about the future challenges that Silicon Valley will face.

“Our Silicon Valley team in Washington would be greatly strengthened if we add Ro Khanna,” he said, particularly for the sake of changing federal taxes and regulations that impede the region’s economy. “Silicon Valley’s interests would be his number-one priority.”

Khanna “understands the tech sector and the global challenges to the valley,” Reed said, and can make the region’s case “in a way that can get bipartisan support, which is certainly needed in the House.”

The 37-year-old Khanna also got a boost in his campaign with The New Yorker doing a piece on him which got a message out strongly: Silicon Valley loves him; Honda at 73 is passé.

The piece pointed out that in his 2012 book, “Entrepreneurial Nation,” Khanna wrote that “manufacturing is essential for American innovation.”

Khanna was quoted as saying, on his pride in America and Silicon Valley’s accomplishment: “Think of great civilizations. Ancient Greece—you think of Athens. Italian Renaissance—you think of Florence. When people look at America and our contribution to human history, they’ll look to Silicon Valley and innovation and technology as one of the pinnacles of what the nation has contributed.”

The New Yorker pointed out that of Khanna’s 346 endorsements, as per his web site, more than half come from “technology leaders,” including Eric Schmidt, of Google; Sean Parker, most recently of Founders Fund; and Marissa Mayer.

The New Yorker piece ended with this quote from Khanna: “…The technological change and innovation here is profoundly changing the world. The last page of ‘The Great Gatsby’—I forget the line, about looking at the dock and moving toward the future and all that. The Valley is the representation of what Fitzgerald was writing about, that sense of American promise and exceptionalism. It’s tinged with the same excesses, at times, as the Roaring Twenties, but there’s also a sense of pure Americana. And the challenge for representing this place is: How do you do so in a way that’s humble?