An exercise to likely embarrass Modi ahead of his visit.

NEW YORK: “All the News That’s Fit to Print,” that’s the slogan of arguably the finest daily print newspaper in the United States – The New York Times, winner of 112 Pulitzer Prizes, since its inception in 1851. The slogan was created in 1897, by the then owner Adolph S. Ochs – whose family still has ownership – as a declaration of impartial news reportage.

So, the question is, does asking for US-based Indian origin readers’ comments on the upcoming visit of the Indian Prime Minister Narendra Modi, with the message that an editor or reporter may follow up to hear more about “your story”, apt journalism to honor that motto, or is the purpose to create news out of animosity?

The Times had this headline on September 10th: ‘How Do You View Narendra Modi’s Visit to the U.S.?’ 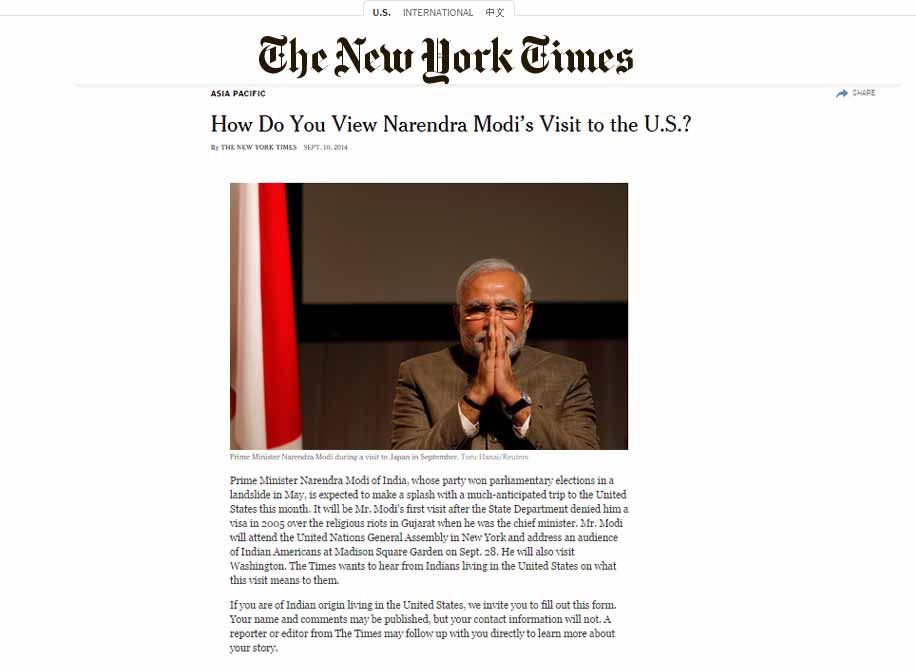 Two paragraphs followed, requesting follow-up, interactive action: ‘Prime Minister Narendra Modi of India, whose party won parliamentary elections in a landslide in May, is expected to make a splash with a much-anticipated trip to the United States this month. It will be Mr. Modi’s first visit after the State Department denied him a visa in 2005 over the religious riots in Gujarat when he was the chief minister. Mr. Modi will attend the United Nations General Assembly in New York and address an audience of Indian Americans at Madison Square Garden on Sept. 28. He will also visit Washington. The Times wants to hear from Indians living in the United States on what this visit means to them.

‘If you are of Indian origin living in the United States, we invite you to fill out this form. Your name and comments may be published, but your contact information will not. A reporter or editor from The Times may follow up with you directly to learn more about your story.’

The form has since been removed from the website, with the message: ‘Sorry, but this form is no longer accepting submissions.’

One can only presume that the overwhelming number of reactions received would have forced the Times to do a Huffington Post-style of crowdsourced funding to carry on their coverage of the Ferguson riots, to gather more vitriol against Modi. Or to be fair, fervent praise that poured in, too.

Let’s accept one fact before further judgment is passed on Modi: even though the courts in India have cleared him of any crimes in the Gujarat riots, a lot of people in India hate him, believe firmly he was a key figure in the riots which set deeper Hindu-Muslim divide, even though his elevation as the prime minister has been cathartic.

But let’s also put it this way, coming back to the Times strategy of coverage of Modi’s visit to the US: will the esteemed daily do an editorial, an analysis piece or a hark-back-to-the past story, reliving history, on the O J Simpson trial today, if need be, or will they ask for readers’ comments on what they feel about his visiting, let’s say, Times Square, and then have a bunch of editors and reporters call those readers who responded, probe those feelings, emotional drivel, or nuanced, sophisticated arguments as to why he should never have been let off, to put up a story.

Will the Times, through that coverage, with their ex-cellent (that hyphen is not a typo by the way) motto of “All the News that’s Fit to Print’ (although I personally like their website motto of ‘All the News that’s Fit to Click’ better – sometimes, in a fixed, and shrinking newspaper space, all the news that is fit to print just cannot be fit in, or not allowed to be fit in), try Simpson all over again, or just create in that meaningless process, a greater White-Black divide.

No, sir, this is irresponsible journalism.

Especially, for a company which boasts of that many Pulitzers, more than any newspaper in history. It smacks of overreach, to create news out of emotions of the common man, who are still nurturing wounds from loss of family members killed in barbaric fashion in the Gujarat riots and have strong negative feelings towards Modi. Coverage of this sort will only serve one purpose: to drive a wedge deeper between Hindus and Muslims. And overall, to bring shame, persecute a man, who has through sheer determination and willpower achieved the highest political station any man or woman can achieve in India.

But, who am I to admonish the Times. I don’t have any Pulitzers to display, never will. The New York Times, after all, is arguably the finest newspaper in the United States.