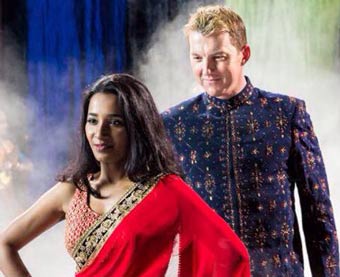 Sharma was quoted by Business Standard as saying, “We were all excited prepping up for this final number composed by Salim-Sulaiman. Specially, because the number has some interesting twists and turns, and Brett in a traditional Indian costume. Brett took time out from his World Cup commentary a week before the big India Australia match.”

He added: “His love for India and the ease with which he takes on Indian customs is the reason why many call him a de facto Indian. To see if we managed to convince Brett to do a Bollywood thumka his fans will have to wait and see the film.”

According to a post in the official Facebook page of UnIndian, the final leg of the shooting was completed today afternoon. The post was also accompanied with a few images of Lee dancing with Tannishtha.

Lee appears in the lead role of UnIndian as a foreigner who falls in love with an Indian woman (Tannishtha) who is also a mother of an eight-year-old child.

And the last leg of our filming is all wrapped up! Here’s a glimpse from behind the scenes for you of the beautiful…

Lee had earlier appeared in a cameo role of a Bollywood film “Victory”, in 2009, starring Harman Baweja.

UnIndian is expected to hit theaters by the end of the year and we can expect the ferocious pace bowler who entertains the spectators do the same in his new venture.