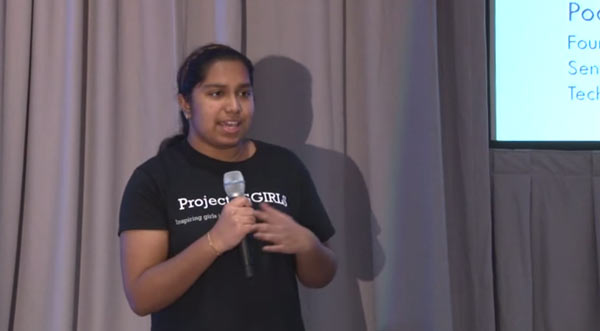 WASHINGTON, DC: Pooja Chandrashekar may attend Thomas Jefferson High School for Science and Technology, a top ranked magnet school, but even there the senior shines among her peers.

She also founded a national nonprofit that encourages middle-school girls to participate in STEM programs and developed a mobile app that analyzes speech patterns and predicts with 96 percent accuracy whether a person has Parkinson’s disease.

If you think that’s quite the résumé, you’re not alone; college admissions offices did too. And not just any colleges — Pooja earned admission to all eight of the Ivy League schools. The Post reported she was also accepted at Stanford, MIT, Duke, the University of Virginia, the University of Michigan, and Georgia Tech, bagging a perfect 14 out of 14.

Pooja said that she decided to apply to all eight ivies hoping to get into just one of them, “because college admissions is really unpredictable.”

“They are all fantastic schools, so I couldn’t discount any of them,” she told The Washington Post. “I wanted to make sure I could get into a really good school and have more choices.”

She’s narrowed her list of potentials to Harvard, Stanford and Brown, where she got into a program that guarantees her admission to the university’s medical school.

The young scholar hopes one day to pursue a career in medicine and bio-engineering. She attended the private Nysmith School in Herndon, Virginia before enrolling at Thomas Jefferson, where she has taken classes in computing, artificial intelligence, and DNA science.

The only child of two engineers who emigrated from Bengaluru, India, Pooja explained to the Post that what sets her apart is her passion for promoting STEM among young girls.

Her non-profit ProjectCSGirls, hosts nationwide computer science competitions, “dedicated to closing the tech gender gap,” according to its Web site.

“I want to encourage diversity in the field,” she said.

In addition to Pooja, other students who got in into all eight Ivy League schools this year include Victor Agbafe, Harold Ekeh and Munira Khalif — the latter is the 17-year-old daughter of Somalian immigrants. Last year, Kwasi Enin achieved the feat of being accepted at all eight Ivies.

Agbafe, a student at Cape Fear Academy in Wilmington, North Carolina, also got into all the top 14 schools like Chandrasekhar, reported the Business Insider.

At Cape Fear Academy, Agbafe serves as Student Body President, plays on the basketball team, and participates in various other extracurricular activities. He wrote his Common Application essay on participating in his school’s Day of Silence, and how “the rights of the LGBT community ties in with human rights.”