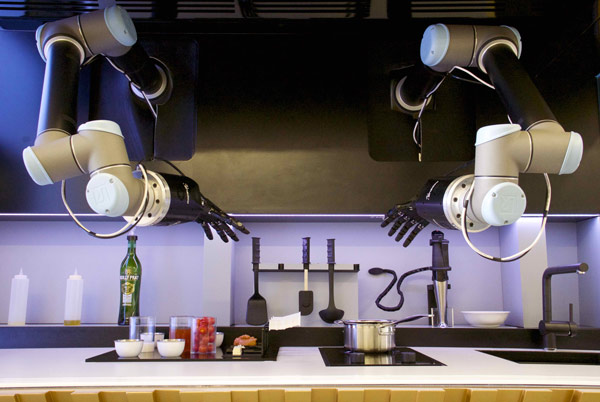 WASHINGTON, DC:  The world’s first robot chef took a bow on the grand stage when it cooked for attendees at the Consumer Electronics Show (CES) in Shanghai this past weekend.

As previously reported by the American Bazaar, recipes are selected via an app, with the machine being able to stir, adjust the hob, pick up bottles, pour jugs, and perform other movements.

The machine, designed by London’s Moley Robotics, is slated to host a library of 2,000 dishes to pull from by the time it’s launched for the consumer market in 2017.

The robot display at CES 2015 came with a pre-equipped kitchen, as it is necessary for it to have an understanding of the placement of utensils and ingredients, though the consumer model will also be able to be integrated into pre-existing kitchens, reported Crave Online.

“Some Chinese recipes may require additional equipment, such as a rice steamer, for example. Whatever equipment the chef has used, the robot should also have one. The kitchen robot is able to work with any additional equipment required for the preparation of the dish,” said Moley founder and chief executive Mark Oleynik to the South China Morning Post.

Moley’s robotic chef served up crab bisque, which appears to have established itself as a specialty.

“Crab bisque is a challenging dish for a human chef to make, never mind a robot,” Tim Anderson, winner of 2011’s season of MasterChef in the U.K., explained to Time Magazine. It was of Anderson’s bisque recipes was taught to the robot. “If [the bot] can make bisque, it can make a whole lot of other things,” he said.