NEW YORK: The ‘Captain Cool’ of not only India cricket but all across the world, Mahendra Singh Dhoni, was felicitated by the Edison Council of the Township of Edison with a Resolution which was a nod to his impeccable mannerisms, cool and calm demeanor on and off the field, which has been an inspiration for children, at an event organized by the Bihar and Jharkhand Association of North America (BJANA), at the Country Club in Toms River, New Jersey, on Sunday.

Dhoni, accompanied by his wife Sakshi Dhoni, and good friends, the former deputy chief minister of Jharkhand Sudesh Mahto and his wife, had earlier attended a puja at the local Siddhi Vinayak temple, in Toms River, where he interacted with a crowd of some 150 odd people. The temple will be officially inaugurated later this year.

Dhoni revealed in an interaction with the people gathered at the country club that Sachin Tendulkar was the one cricketer he always looked upon as a role model – the video of the interaction is at the end of this report.

“When we were growing up, Sachin (Tendulkar) was a God to all of us. He had that aura. The reason was that I saw not only how successful he was, but also how humble he was. How he believed in the process. Every time he walked onto the field, he wanted to improve as a cricketer,” said Dhoni, to loud applause from the crowd.

Speaking of India’s incredible run at the 2011 World Cup, which culminated in the team winning the title, Dhoni said that more than anything else it was a “relief”.

“Winning the World cup was a sigh of relief, more than anything else. The team was able to concentrate on areas that we wanted to concentrate,” he said, adding: “Later on, we enjoyed the moment because it was something that was not only big for the team, but for the entire country.”

Speaking of success, Dhoni, who was lauded in the Resolution for his humble personality, and staying away from publicity – which nevertheless has seen him become India’s richest sportsperson – advocated staying away from greed, and taking pride in achieving small, short-term goals, to raise one’s specter of bigger ambitions in life. 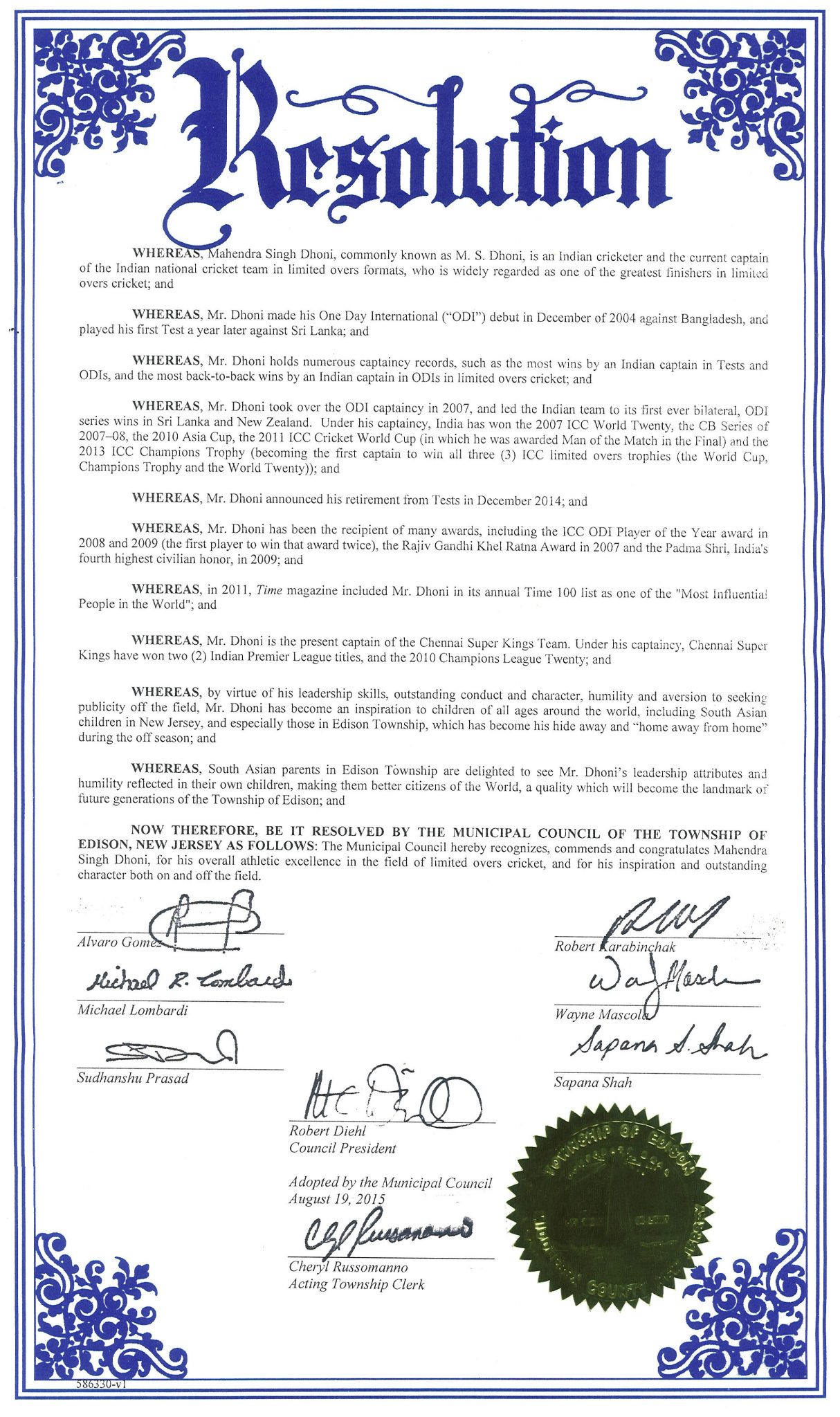 “One of the most difficult things in life is to control greed. There is no upper limit to greed. But at the same time, we should set up a standard as to this is what I want to achieve. For example, I’m a decent cricketer, but tomorrow if I want to be Usain Bolt in 100 meters race, that is not something that will be possible,” said Dhoni. “Slowly setting up targets in life is something that is very crucial. And as you keep reaching those targets, you keep changing your goals.”

Dhoni added, expounding on a theory which has held him in good stead on the cricket field, where he calculates the pace of the game and bides his time for those winning runs and classic moments: “It not what you want to be in 15 years’ time, it’s important what you do today, what you do tomorrow. Those small steps help you in turn to help you achieve what you want to become. Small things matter more than the bigger goals.”

At the Siddhi Vinayak temple, Dhoni also interacted with the chairman of the temple committee, Avinash Gupta. The Indian cricketer has often come down to New Jersey for vacations, but it’s the first time he agreed to a public meet-and-greet and felicitation program.

Dhoni sounded upbeat about the Indian cricket team, which is presently in Sri Lanka, in his interaction with children and teenagers who crowded around him. People tried to barge their way through for selfies and to shake hands with the most famous active Indian sportsperson.

“Keep supporting us, we have a good team and all are in good form, we will keep doing well,” Dhoni told the exuberant crowd.

He also admired the thriving Indian culture in the US, which he said augured well for future Indian American generations.

“This is something that is really appreciable. Having immigrated to the US many years ago but to still be 200 per cent Indian and still acknowledge and respect the traditions of the country you are in, I feel is something that everybody needs to learn,” he said.

Dhoni was presented the Resolution by the President of the Edison Cricket Club and cricket aficionado Atul Huckoo.

Dhoni was also presented a police cap by a member of the Edison Police department. He, along with his wife, flew to the Caribbean today, for a vacation.