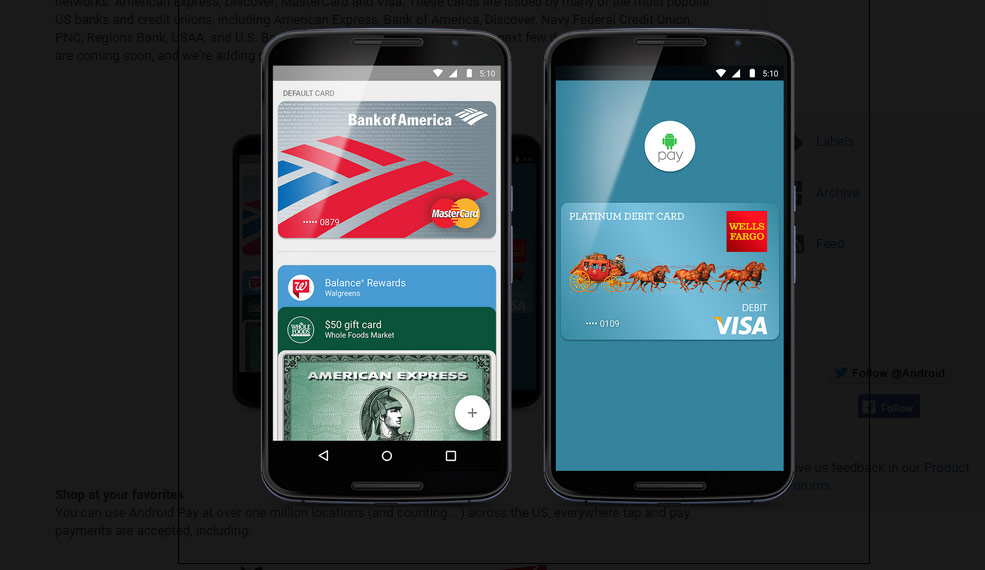 Google has started rolling out Android Pay, its tap-to-pay mobile wallet, in the US. The app is replacing Google Wallet as its primary payment system.

In a blog update, the company said that the app based payment system works with any mobile carrier and at a million businesses across the US including GameStop, Panera, Walgreens, Macy’s, Subway and Whole Foods. The app stores credit, debit, gift and loyalty cards that can be used for transactions.

The Android Pay can be used to make payments by placing a mobile device near an NFC-connected terminal. That means, only NFC-enabled Android devices (running KitKat 4.4+) can use this application.

Android Pay supports credit and debit cards from the four major payment networks: American Express, Discover, MasterCard and Visa cards issued by popular banks and credit unions in the US.

If you’re an existing Google Wallet user, you’ll be able to access Android Pay through an update to your Wallet app. For new users, Android Pay will be available for download on Google Play in the next few days, and will come preinstalled on new NFC-enabled Android phones from AT&T, T-Mobile, and Verizon Wireless.

The company said that Android Pay is supported by industry standard tokenization to keep personal and financial information secure. This means your real credit or debit card number isn’t sent with your payment. Instead, the app uses virtual account number that provides an extra layer of security.

As soon as you make a purchase, you’ll see a payment confirmation that shows where a given transaction happened, so it’s easy to catch any suspicious activity.

And if your phone is ever lost or stolen, simply use Android Device Manager to instantly lock your device from anywhere, secure it with a new password, or even wipe it clean of your personal information.

The company added that more feature updates are coming later this year.