Adults can take Trump’s rhetoric, but not kids, argues the girl’s mother. 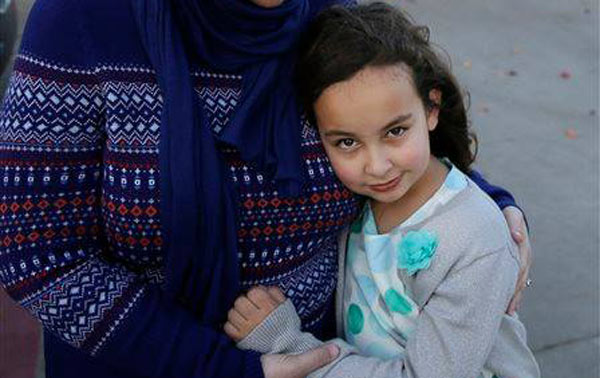 The Facebook post of Melissa Chance, mother of an 8-year-old girl, Sofia, written after her child got intimidated by US presidential candidate Donald Trump’s speech that echoed his anti-Muslim plans, has gone viral on the social media.

Melissa wrote on her Facebook wall: “It’s a sad day when I have to comfort my eight-year-old child who heard that someone with yellow hair named Trump wanted to kick all Muslims out of America.”

Sofia is believed to have heard the speech of Trump on board USS Yorktown and got scared that she along with her mother might have to leave the country. Fearing deportation, she packed her belongings in a big bag, all ready to leave. When Melissa came home, she had to comfort her sobbing child who thought the army was coming to deport them.

“She had begun collecting all her favourite things in a bag in case the army came to remove us from our homes.” Melissa wrote on her wall. 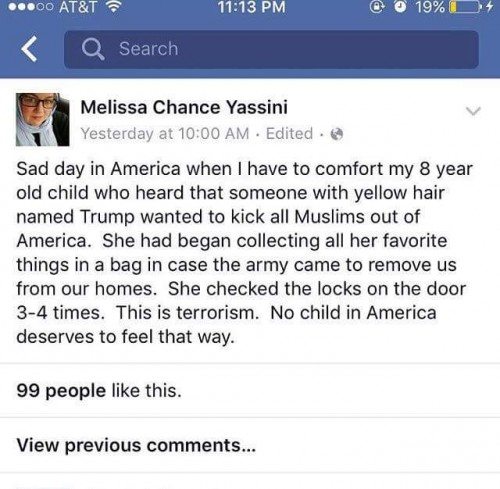 Sofia, however, continued to be worried, and periodically checked out if someone from the army was outside.

Taken aback by the nervous reaction of Sofia, Melissa lashed out against Trump saying, “”She checked the door 3-4 times. This is terrorism. No child in America deserves to feel this way.”

Her Facebook post further read that “I want people to understand the impact that their words have on these children. We often forget, we’re waging war on one another with words, and we’re adults. We can take it. The kids are suffering with this. They go to school every day and they’re afraid to tell people they’re Muslim. This has to stop.”

The social media went abuzz with #IWillProtectYou soon after Melissa’s Facebook went live. Many US politicians, army veterans serving individuals of the forces, and the general public, came out in in support the girl and her mother, reassuring them that they would not be deported.

Melissa’s post has been seen more than 20,000 times after it was spotted by servicewoman Kerri Peek who urged her “friends in the armed forces” to reassure families like Melissa’s.

Islamophobia has been doing rounds since the killing of 14 people in San Bernardino shooting, which was orchestrated by a Pakistani American Muslim couple who allegedly got inspired by Islamic State.

Army personnel, both men and woman, have been posting messages of reassurance with the hashtag #IWillProtectYou.

Dear Sofia Yassini, I swore to protect the US Constitution against ALL enemies foreign and domestic #iwillprotectyou

Are you A Muslim in America and afraid because of your religion? Do not be afraid. #iwillprotectyou #promise

@ABC #IWillProtectYou I got your back. Ignorance is plaguing all over.. be strong and keep your faith little one

Governors of some US states have already turned their back at the Syrian and Iraqi refugees for fear of terror attacks.

Earlier, a 12-year-old boy named Ahad Khan came home all in tears after his best friend called him a future terrorist who is untrustworthy.

Mark DeAntonio, a child psychiatry professor at the University of California Los Angeles (UCLA) was quoted by The Indian Express, saying, “Children expect that society will be nurturing and protective. Statements implying detainment or exclusion for arbitrary reason like race ethnicity or religion create anxiety and trauma.”

Ahad’s father, Raza Khan, the chairman of the science department at Carroll Community College, shared Ahad’s experience in an open letter to Trump on Facebook, which was shared over 4500 times.

According to a Gallup poll, Americans who suspect the loyalty of American Muslims is more likely to view Muslims worldwide as Anti-Americans.

On December 7th, Trump told during his infamous USS Yorktown speech, “Donald J. Trump is calling for a total and complete shutdown of Muslims entering the United States until our country’s representatives can figure out what the hell is going on.”