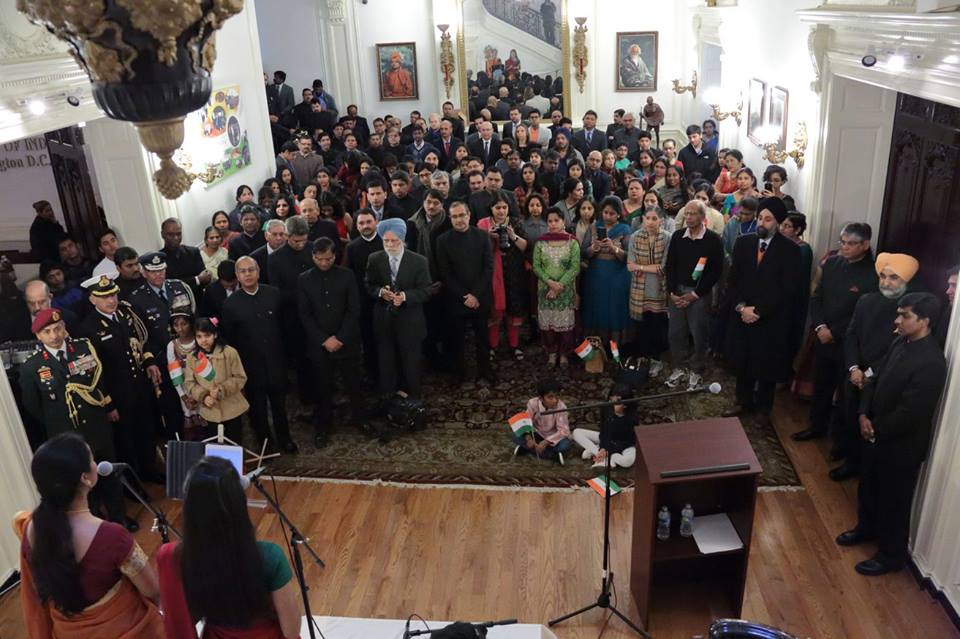 While India celebrated its 67th Republic Day in India with élan and in tight security with French President Francois Holland as the chief guest, Washingtonians too came in large numbers to celebrate India’s Republic at the Indian Embassy in Washington, DC.

On a cold and with huge snow piles all around, on January 26th morning the Indian Embassy on Massachusetts Avenue, Arun Singh, Indian Ambassador to the United States, hoisted the Indian Tricolor Flag just outside its premises followed by India’s national anthem and offered flowers to nations’ father, Mahatma Gandhi’s statue across the street from the embassy. He then addressed the attendees and read out India’s President Pranab Mukherjee’s message to the nation.

“This year, with an estimated growth rate of 7.3 per cent, India is poised to become the fastest growing large economy,” The ambassador quoted President Mukherjee, “Peace is the primary objective of a rational consciousness as well as our moral universe. It is the foundation of civilization and a necessity for economic progress,” he said.

A cultural program was followed with the Musical Group of Young Indian Americans showcasing vocal and instrumental talents. They began by singing “Sare Jahan Se Achcha Hindustan Hamara,” (Our India is the best in the world), then presenting three Tamil patriotic songs and concluded with the national song “Vande Matram,” (Tribute to Mother India). The group was led by Kamalakiran Vinjamuri on the Mridangam, Anand Vemuri on the Violin, Sahana Narayanan (Vocal) and Shriya Srinivasan (Vocal).

Despite the weather, the embassy was packed with Indian-American and other American guests to celebrate and honor this historic day. “It’s a great to celebrate India’s Republic Day,” said Sushmita Mukherjee, who came with her parents to attend the function.

“It is wonderful to see so many Indian community members getting together and celebrating the Indian Republic day at the embassy,” said Taranjit Singh Sandhu, Charge d’ affaires.

While the Minister, Press, Information & Culture, Sridharan Madhusudhanan and the Minister of Community Affairs, N.K. Mishra, of the Embassy of India, gave their wishes of the Republic Day to the gathered guests, the three wings of the army, air force and navy, looked magnificent in their decorative uniforms happily obliged children with photographs.

The Republic Day in India is celebrated every year with great pomp on 26th of January to honor the Constitution of India as it came into force on the same day in the year 1950. It had replaced the Government of India Act, 1935 into the governing document of the India. At this day, a national holiday is declared by the Indian Government. The new Indian constitution was sketched and approved by the Indian Constituent Assembly and decided to celebrate it on 26th of January every year as India became a republic country.