No change in tax slabs, relief for renters. 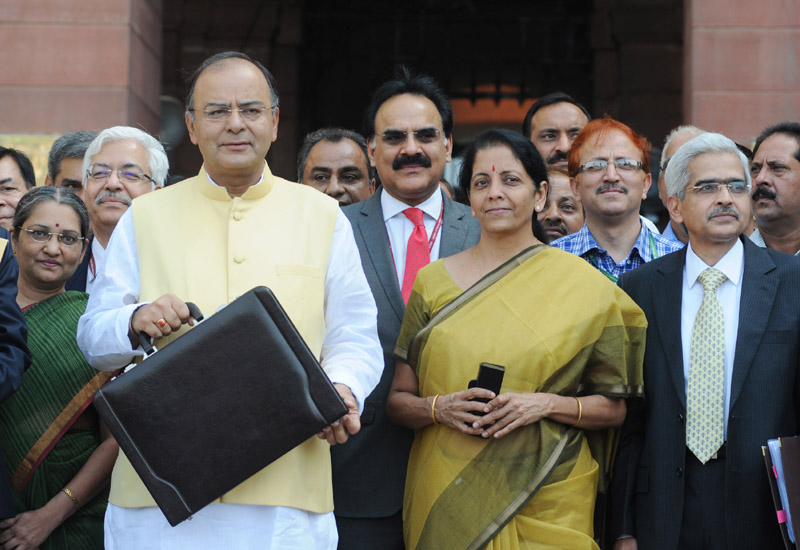 The focus on rural economy and the promise to double the income of farmers in five years came against the backdrop of a distressed agrarian economy, fewer jobs and assembly elections in five states this and next year.

The direct impact on taxpayers from the proposals announced during the 100-minute budget speech will be a Rs.3,000 rebate, benefiting 20 million assessees. Those living in rented homes will get a higher exemption of Rs.60,000 now, against Rs.24,000 earlier. But the tax slabs remain unchanged.

At the same time, withdrawal of provident fund and pension upon retirement are partially taxable.

Jaitley also announced an amnesty for those with disputed tax claims, with a waiver of penalty on amounts up to Rs.10 lakh. He said 300,000 such cases were pending before appellate authorities, for an amount totaling Rs.5.5 lakh crore.

Similarly he also unveiled a limited tax compliance window from June 1 to September 30 for people to declare their undisclosed incomes, with a tax liability of 45 percent of value, including the surcharge and penalties — together with immunity from scrutiny, enquiry and prosecution.

His other steps include a pilot project to extend the direct cash benefit transfers, currently in areas like cooking gas to the fertilizer sector, as also Rs.25,000 crore for the recapitalization of state-run banks that are under financial stress on account of mounting bad loans.

While there were misgivings over money set aside for additional capital for banks, Jaitley told a press conference later that more money will follow as and when warranted. “The budget is not the last word on this,” he said, adding he was also open to consolidation of commercial banks.

On cutting subsidies, he promised a bill soon to use Aadhaar for direct transfer of cash.

Prime Minister Narendra Modi was quick to appreciate the budget and said its focus on development of agriculture, farmers, women and rural areas will give a major push to India’s agrarian economy. “It will also help the poor man realize the dream of owning a house,” he said.

Jaitley also said the government will meet its fiscal targets but said that from next year he proposed to do away with the classification of plan and non-plan expenditure — a move bound to stir up a controversy.

“I have weighed the policy options and decided that prudence lies in adhering to fiscal targets. Consequently, the fiscal deficit in revised estimated 2015-16 and budget estimates 2016-17 have been retained at 3.9 percent and 3.5 percent of GDP, respectively,” he said.

This move is likely to face stiff opposition.

Jaitley, a lawyer by profession, decided to bring his fellow practitioners under the service tax net of 14 percent. He also imposed an across-the-board cess of 0.5 percent on services towards farmer welfare, which will add 50 paise for every Rs.100 one spends on food to mobile bills.

He also left the market mood sullen by proposing to hike securities transaction tax for options to 0.05 percent from 0.017 percent, levy an additional dividend distribution tax of 10 percent payable by recipients in excess of Rs.10 lakh per annum and 1 percent surcharge on luxury cars.

This was enough to sully the market mood. The sensitive index of the BSE dipped sharply to a 52-week low soon after the finance minister read out these proposals, but eventually recovered slightly towards the end of the day, but still down 152.30 points, or 0.66 percent, at 23,002.00 points.

Among the various sectors, the allocation for the ministry of agriculture and farmers’ welfare was enhanced by 93 percent to Rs.44,485 crore, for rural development by 10.7 percent at Rs.87,765 crore and for health and family welfare by 13 percent to Rs.39,533 crore.

A major boost was also given to infrastructure including energy with a 11.3 percent hike in the outlay to Rs.246,246 crore, as also for human resource development with allocation up by 7 percent at Rs.72,394 crore.

The budget also used the opportunity to send out signals to the global investor, seeking to ease the foreign equity norms. Notably, 100 percent such equity will now be permitted in multi-brand retailing where the produce sold has been processed and sourced locally.

In a bid to boost entrepreneurship, a lower corporate tax rate has been proposed for small firms with a turnover of below Rs.5 crore, to 29 plus surcharge and cess, and 100 percent deduction of profits for three out of five years for start-ups set up between April 2016 and March 2019.

Similarly to boost “Make in India”, changes were proposed in customs and excise levies on certain inputs to reduce costs and improve competitiveness in sectors such as IT hardware, capital goods, defence, textiles, minerals fuels, chemicals and petrochemicals, and aircraft and ship repair.

Jaitley opened his speech saying while the global economy was in stress, India was still going strong. “The risks of further global slowdown and turbulence are mounting. This complicates the task of economic management for India,” he said.

Jaitley also used the opportunity to make a political statement: “Our initiatives in the last 21 months have not only placed the economy on a faster growth trajectory but have bridged the trust deficit, created by the previous government.”