Gabbard is the first practicing Hindu in US Congress. 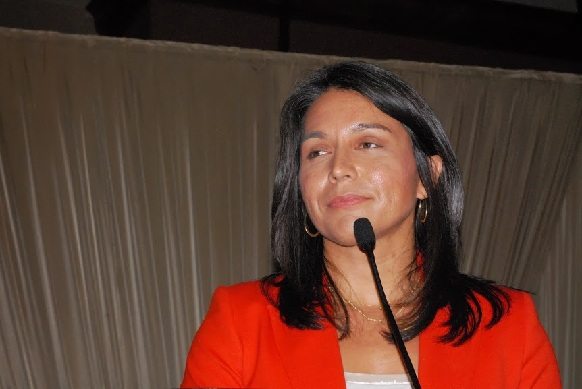 Hawaii Rep. Tulsi Gabbard, the first practicing Hindu elected to the US Congress, and who quit the Democratic National Committee (DNC) to endorse Bernie Sanders as the party’s nominee, has ruled out squabbles with the DNC as the reason for her leaving as vice chairwoman of the DNC.

“This had nothing to do with the DNC or DNC politics. This had everything to do with my decision that I could no longer stand on the sidelines as elections are taking place to determine who our potential next commander in chief could be,” Gabbard, the DNC’s vice chairwoman until her resignation Sunday, told MSNBC’s “Morning Joe” on Monday.

Gabbard, an Army soldier and veteran, called her decision “incredibly personal and it’s incredibly important because I think this is the most important job of a president is to be our commander in chief.”

“There’s a very clear contrast and clear difference when it comes to our two Democratic candidates and who will exercise good judgment, who will stop us from continuing these interventionist regime change wars that we’ve seen in Iraq and Libya and now in Syria that have cost our country so much in terms of American lives, trillions and trillions of dollars, what to speak of the hundreds of thousands of lives in the Middle East that have been lost to this and the impact on our economy here at home,” Gabbard said, roughly four weeks until her state votes in its primary, to Politico. “Bernie Sanders is that candidate who will not take us, service members and our country, into these interventionist wars and Hillary Clinton, through her record, has proven that she will continue that and that’s what’s important to me and I think it’s important for our voters to know before they go and head to the pollstomorrow and into the coming weeks.”

Gabbard and DNC Chairwoman Debbie Wasserman Schultz clashed over the party’s debate schedule last October, with the Hawaii Democrat saying last year that she was disinvited from the party’s first debate for demanding more of them. Wasserman Schultz blasted Gabbard’s complaints at the time, affirming that she would have been a distraction to the Las Vegas debate.

In an interview to CNN, Gabbard defended Sanders’ foreign policy credentials Monday, echoing his campaign’s argument that the choice in the Democratic primary was a “question of experience versus judgment,” while criticizing Hillary Clinton’s past positions.

“We could look to Dick Cheney if we want to look for experience in foreign policy,” Gabbard told CNN’s Alisyn Camerota in an interview on “New Day.”

“We need a commander-in-chief who will exercise good judgment and foresight, and stop getting us into these interventionist, regime-change wars, as we’ve seen in Iraq, as we’ve seen in Libya, and as we’re seeing now occurring in Syria,” Gabbard said. “The stakes are very high and the contrast is very clear between Hillary Clinton and Bernie Sanders on these issues.”

Gabbard focused her criticism of Clinton on her responses to foreign policy crises in Libya and Syria, in particular.

“You know, with Hillary, we’ve seen not only was she a champion for the Iraq War, she was the architect for the war in Libya, to overthrow (Moamma) Gadhafi, which we’ve seen has resulted in tremendous loss of life and chaos, and now with ISIS and al Qaeda having a stronghold in that country,” she said. “And now she continues to push for the same kind of regime change in Syria, with an escalation by putting a so-called no-fly-zone in place that puts us directly at odds with Russia.”

Gabbard repeatedly framed the choice between Clinton and Sanders as a question of experience versus judgment, pitting Clinton’s extensive experience in government and foreign policy against Bernie Sanders’ vote opposing the Iraq War.

“That’s the important question here … a question of experience versus judgment,” Gabbard observed — adding, “To me the real question is judgment. And as a soldier, that’s what I look for in my next commander-in-chief.”