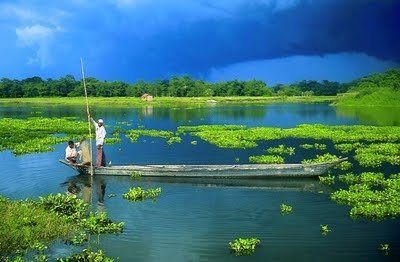 Assam cabinet had held a meeting in Majuli to highlight the threats being faced by the island from floods and erosion. The government decided to upgrade Majuli, which was a sub-division, in the first cabinet meeting of the BJP government led by Sarbananda Sonowal, in June.

According to the government notification, the river island became the 35th district of Assam.

“If we want to usher in an era of development in Majuli, everybody has to put in effort. Emergence of Majuli as a full-fledged district on the 90th birth anniversary of Bhupen Hazarika is indeed a matter of joy, pleasure, and pride. Hazarika’s… role towards transforming Satriya dance… is laudable,” said Sonowal.

Sonowal, who represents Majuli in the state assembly, had promised to upgrade the status of the island which had been in a neglected stage for long.

“Majuli will become the nerve center of governance in the state and people will have to help in realizing the true potential of Majuli,” said Sonowal.

The district located at the confluence of Brahmaputra and Subansiri River faces a threat from the floods and erosion it faces. Majuli covers an area of 880 square km with a population of about 2.5 lakh. According to reports, almost 60 percent of the island has been washed away by the Brahmaputra River. The island had an area of 1246 square km in 1853.

Waterways are the only mode of transportation to reach the island. The central government has approved the construction of two bridges to connect the island to the mainland.

With the up gradation of Majuli as a district, the people expect the intervention of both the central and state governments to resolve the problems.