Astronaut Shawna Pandya on Thursday cleared all the rumors and denied the news that she has been shortlisted by NASA for a space mission.

Several news reports said that Pandya would be part of NASA’s 2018 mission under the Citizen Science Astronaut Program and described her as the third-ever woman of Indian origin, after Kalpana Chawla and Sunita Willams, to be chosen for a NASA mission.

“There has been no new announcement, flight assignment or selection of missions with respect to my work as a citizen-scientist astronaut with Project possum or The PHEnOM Project. I am no more or less likely to fly than any other member of than these projects than I was 24 hours ago. I remain, however, a steadfast, committed and dedicated teammate and crew member to the work of both projects,” Pandya wrote in a Facebook post.

She clarified that The Canadian Space Agency astronaut selection is ongoing and she is not a part of it.

“While I have previously interned at NASA-Johnson Space Center, I have no current affiliation with either organization, and would like to clarify that any reports or articles claiming such are mistaken,” she wrote.

The 32-year-old physician also clarified that she in neither a neurosurgeon nor an opera singer. While she trained in neurosurgery for a short period, her medical license is in general practice. 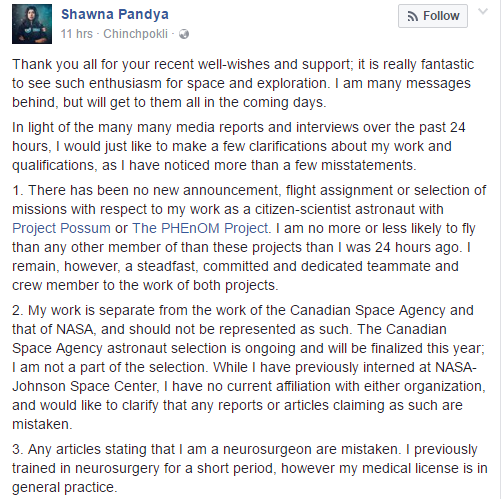 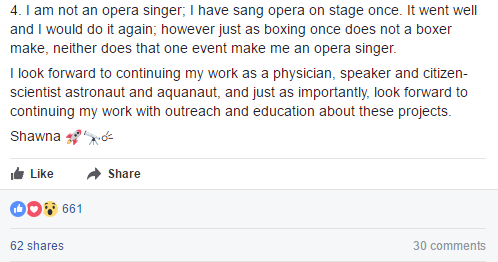