This year’s parade, which is boasted as the largest India Day parade in a foreign country, had Baahubali stars Rana Daggubati and Tamannaah as chief guests.

Since 1981, the Federation of Indian Associations has been hosting the India Day Parade in order to continue the legacy of a great tradition and to showcase the unity of the Indian diaspora.

FIA is an umbrella organization in the tri-state that represents peace, growth, and unity of the Indians, enabling them to create a healthy and peaceful community.

India Day Parade is organized every year in which thousands of Indian Americans marching through Madison Avenue in Manhattan showing their love for the motherland and the adopted land.

The India Day Parade has been a colorful NYC tradition for almost 50 years! Today we celebrate a community that makes New York City great. pic.twitter.com/t3CL8Sh0vl

During his speech, Blasio said that India Day Parade also marks the “extraordinary contributions” of Indian Americans to the City. 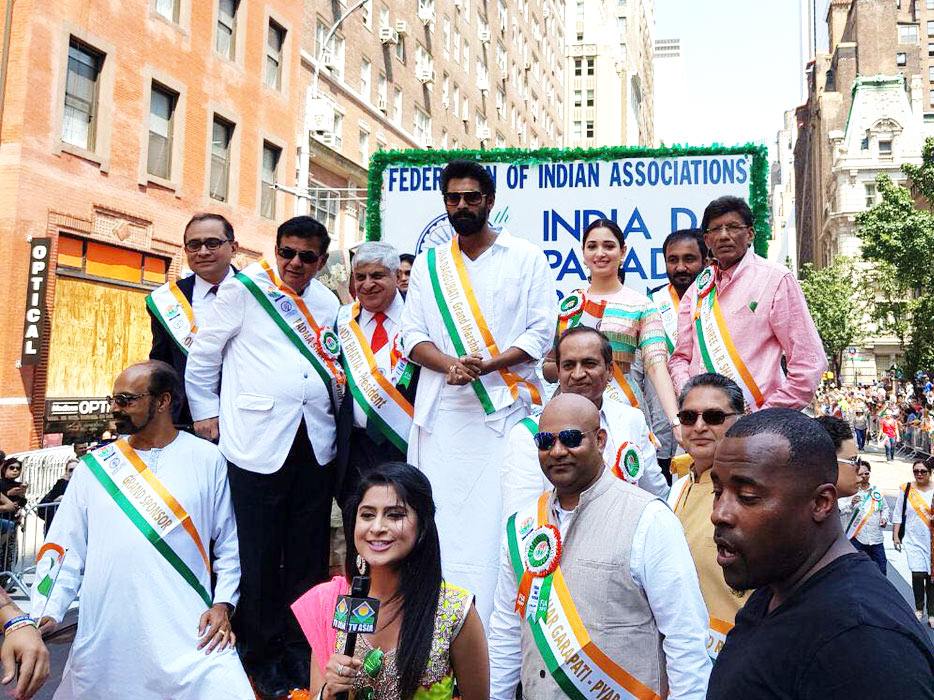 The chief guest of this year’s Parade, Rana Daggubati said that it is a great honor for him to be attending the India Day Parade with a packed number of Indian American community members.

“It gives me a huge sense of pride to be here. The people here are the ambassadors of our country making us proud outside of India,” he said.

“Extremely honoured and privileged to be the Grand Marshal at the #IndiaDayParade in NYC!!” he wrote on Twitter.

Extremely honoured and privileged to be the Grand Marshal at the #IndiaDayParade in NYC!! https://t.co/iAjhOq71gL

Baahubali actress Tamannaah said, “It is amazing to see Indians celebrating the country’s culture and heritage. India has given me lot of freedom to express myself. It is very humbling to represent India at the parade.”

“Honoured to be a part of annual India Day parade in #NewYork,” she tweeted.

Honoured to be a part of annual India Day parade in #NewYork. pic.twitter.com/wYDp9EgIrS

On August 15, which marked India’s 71st Independence Day, the tricolor of Indian national flag was used to lit up the Empire State Building.

Sandeep Chakravorty, the Consul-General of the Indian consulate in New York, rung the opening bell at the NASDAQ stock market in Times Square.

Embassy Residence celebrated India’s 7oth year of independence with Ambassador Navtej Sarna hoisting the national flag, followed by the crowd joining in a rendition of India’s national anthem on the well-manicured lawn.