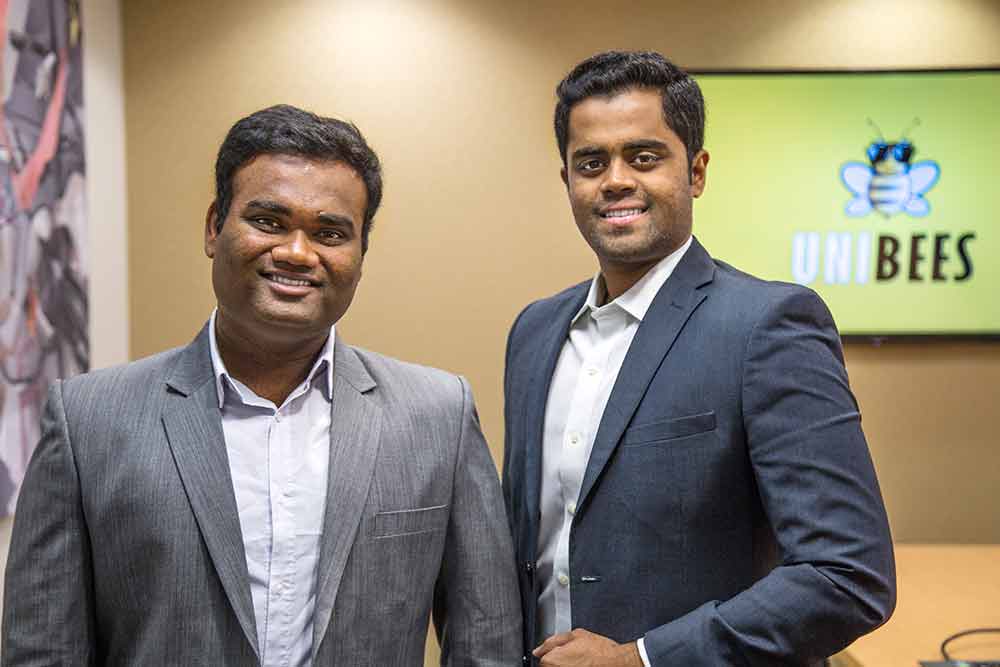 An app named UNIBEES, which is the brainchild of two Indian American students, has gone viral across the major colleges in Texas and is now expanding to more than 100 universities in the United States.

The students from the campuses such as UT Austin, UT Dallas, Texas A&M and UT Arlington are using the app developed by Abinav Varma Kalidindi and Chandra Kiran Achanta that helps its users to find free food, special events and giveaways on campus.

Both Kalidini and Achanta are pursuing their graduate studies from the business school at UT Dallas. Kalidini is a master’s student in finance while Achanta is doing his master’s in business analytics.

The revolutionizing student engagement app also leads to building a community where students with similar interests can interact with each other and also provides walking directions to the locations of campus events.

“We knew there must be free food at an event that we hadn’t heard about. We did some research on how to get that into people’s hands,” a news report published in official UT Dallas website quoted Achanta, a student in the Naveen Jindal School of Management.

The Indian American students said they have taken advantage of entrepreneurship programs at UT Dallas to launch the app and the name ‘UNIBEES’ is inspired from honey bees that collect nectar from different sources and bring it back to the hive.

“It’s very much an exploration tool, but students get hooked on the social aspect of it, too,” Kalidindi said.

In addition to individual users, student organizations and clubs at UT Dallas also using UNIBEES to drive traffic to their events, and vendors like Booster Fuels has offered discounts on the app.

Earlier, UNIBEES got shortlisted as the top 32 student-run digital media startups across the US through the student startup madness competition culminating in SXSW. The entrepreneur team was also awarded a $25,000 grant from the Institute of Innovation and Entrepreneurship at UT Dallas.

In April, Kalidindi won the Future CEO Owlie Award by The Naveen Jindal School of Management.