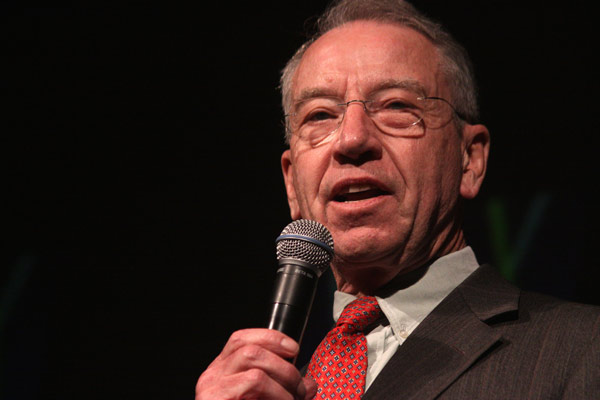 “American workers are increasingly at risk because the United States admits so many foreign workers,” the Iowa Republican was quoted as saying by Newsweek during a congressional hearing on homeland security.

The H-1B visa program allows foreigners to work in the United States in areas where highly skilled labor is required and Indian professionals are the largest beneficiaries of the visa program.

Though the visa is issued for a limited period, Grassley noted that some foreigners are allowed to stay in the country for decades due to visa extension allowed by the government.

“Many companies use cheap foreign labor, driving down salaries, where still many of these employers commit terrible abuses,” the senator said.

“That’s why I was pleased to see this administration take on these issues with its ‘Buy American, Hire American’ executive order,” he added.

Grassley, who called for further action to protect American jobs, said: “It is unclear whether efforts to date have really moved the needle when it comes to protecting American workers.”

Grassley’s remarks assume importance in the wake of the steps taken by the Trump administration to curb immigration. The White House is limiting immigration citing loss of American jobs as the reason. It was an important part of President Donald Trump’s campaign in the run-up to the presidential election.

A proposal to put further restrictions on the existing H-1B rules, which is a part of President Donald Trump’s “Buy American, Hire American,” initiative promised during the 2016 campaign, has sent shockwaves among the immigrants.

Jonathan Withington, chief of media relations for USCIS, had stated that the Department of Homeland Security (DHS) was considering several changes to the existing visa regulations.

But the authorities later clarified that there wouldn’t be any significant changes to the H-1B system.

International students in the US to get priority in non-immigrant visa (January 20, 2017)

US universities use H-1B visa to retain talented students who turn into entrepreneurs (July 6, 2016)

Indians can get Green Card in the US with new proposed EB-6 visa for entrepreneurs (August 10, 2015)