The Titus Kaphar exhibit at Smithsonian documents the journey of African Americans in a creative and modern way.

I pledge allegiance to the flag of the United States of America, and to the republic for which it stands, one nation under god, indivisible, with liberty and justice for all. For all?

Reciting the Pledge, alongside the national anthem, is one of the most universal procedures in America. I have heard it at ceremonies, graduations, conferences, and every single day at school for as long as I can recall. 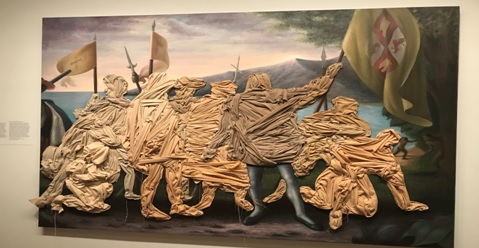 I can clearly remember dissecting the pledge line by line in class, to ensure we were aware of what we were reciting, but this was taught only years after it had already been drilled into our brains.

On July 4th, the Smithsonian Institute of American Art had an exhibit by Titus Kaphar. His work displays the journey of African Americans through history in America in a creative and modern way. My favorite by far is the image of Sally Hemings, lifting up the portrait of Thomas Jefferson with rope, revealing herself after spending a life being restrained.

So, what does the pledge have to do with Titus Kaphar?

His art is one of the many things in our society working towards raising awareness for the reality of America, not the America reflected by the pledge, which we have always been taught. He is revealing those omitted from history and exposing the falsehoods which exist in America’s retelling of history.

We read in textbooks of how the natives were saved by Columbus’ men and how the American civil war was just about “states’ rights,” but in fact, much of America’s actual past remains a mystery.

Only now, due to people like Titus Kaphar, my eyes are opening to the distinction between American History and American History™. I am a privileged, privileged enough to celebrate and be proud of my country. But on this day I can’t help but wonder how oppressed groups so admirably and wholesomely celebrate a country which has for centuries belittled them? How do oppressed groups manage to put their rightful outrage aside and love a country whose history portrays them as nobodies?

Upon these sentiments I took to consulting many of my friends in search for an explanation. It was difficult to understand how anyone could be so mature and poised about such an enraging topic but “to be black on the Fourth of July is to do as we have always done” my friend Carlos Brown explained. “We find joy, celebration, community, and tradition, in spite of the hatred and oppression we deal with. Some celebrate, ignoring the negative. Some protest, recognizing the injustices. I float in the middle. Loving a country that doesn’t love me.”

Ingrained in the fireworks and clouds of barbecue smoke, there lies thousands of nameless heroes whose deeds are attributed to those with a more accepted hue. As I continue to learn our nation’s true history, I am exceptionally thankful for people like Titus Kaphar who are determined to not let stories go untold and continuously amazed by the oppressed communities who display endless love and composure even when faced with hate from all degrees.