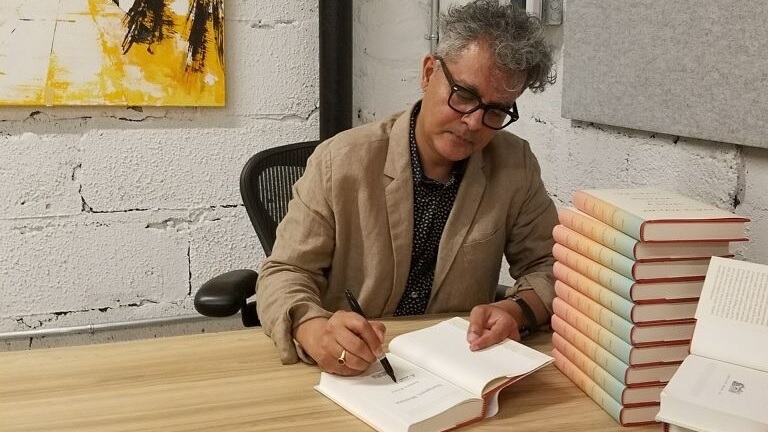 Amitava Kumar signing copies of his book “Immigrant, Montana” at Politics and Prose in Washington, DC, on August 10, 2018. Photo by Snigdha Kumar

Review: In Immigrant, Montana, Amitava Kumar describes cast of characters well, and their feelings and deep emotions are handled brilliantly.

Recently, I had an opportunity to attend a book reading at Politics and Prose in northeastern Washington, D.C., by prominent Indian American author Amitava Kumar, who read excerpts from his latest work, Immigrant, Montana: A Novel.

The full house of attendees at the August 10 event included some well-known literary figures from the area, notably author Manil Suri, and avid book lovers. Also present was Indian Ambassador to the United States Navtej Sarna — a reputed writer himself — who made some pertinent remarks.

Kumar, in his inimitable style, read selected portions from Immigrant, Montana, adding relevant commentary, in a humorous tenor but making serious points at the same time. He answered many questions patiently, giving information supplementing what is in the book.

Since then I have read the book, a page turner. The writing is great, as is the selection of topics. The cast of characters is described well — their feelings and deep emotions regarding pain, anger, regrets, and pleasures, especially in the realm of attachment and love (abiding or fleeting), are handled brilliantly.

The book dissects a number of national and international issues of the past hundred years. One such topic is the US involvement in faraway Vietnam. The venture, according to Kumar, was undertaken without calculation of the cost-benefit ratio, and setting aside moral values that the United States holds dear. The book provides authentic information, careful analysis, and personal narratives.

In another section, Kailash (that was how Kumar was known to friends during their university days) refers to British involvement in World War I, where Indian soldiers made great sacrifices, mostly in France. Letters written by Indian soldiers formed the topic of a research paper that he was writing for a course.

The account relating to the 1947 Partition of India is presented in one section of the book. The writer vividly describes pervasive sadness and pain, and political repercussions of the unfortunate decision that are haunting us to this day.

However, more importantly, Kailash provides us unvarnished accounts of his personal life giving many tidbits, handling tits ecstatically, and CLIT (abridged title of a course) dutifully! His loves, pursuits, guided at times by chaotic desire, are laid out well. He does not hold back the details of his journeys from the hallways/sofas to the bed — from the long wanting to the moment of fulfilment, to when the lady shouts with joy I am going to come!

The pleasures, complexities, and problems associated with love and sex are all dissected in direct, frank language. The book does amount to an incandescent investigation of love. The F- word gets due recognition (undue to us of the earlier generation). I had not paid attention to this four-letter word’s grammatical versatility; it is, now I learn, used as a noun, verb (transitive, intransitive) past participle, adjective, adverb — all grammatical forms, in fact — and further, to express diverse sentiments. Kailash obligingly provides us examples of such usage!

My observations here will be generally shared by other readers of the book, I presume, but for me Immigrant, Montana holds a special meaning — it took me back to my graduate study days in this country, at NC State University in Raleigh from 1955 to 1958.

I had experiences similar to those of Kumar’s but some were quite different in accordance with the society’s customs and mores at the time, and the political situation (national and international aspects) of the Cold War days. India was not a friend of the United States; however, Indian students were treated fairly. We in general didn’t drink much (some abstained totally) and did not seem to have much fun. Some were just bookworms! The times and the location (New York City vs. Raleigh, NC!) certainly accounted for a noticeable part of the difference.

However, luckily, I did well — studied hard and had many friends on and off campus — both Americans and others. (Unfortunately, there were no black students in our university, as segregation was alive and well in those days), I had driven more than  half of the country, and frankly, had more than my share of fun (but still less than Kumar and his cohorts had decades later, which makes me not jealous, only envious!)

Some other sections of the book also remind me of the commonality of our observations and accidental experiences (Kumar’s and mine) in India. Pages 4-6, and 26 in the book describe, among other things, monkeys’ depredations and foreign exchange earnings through their export to the United States. In one particular scene, he writes about how a monkey got hold of the pistol of his maternal uncle and blew his own brains out.

READ: Indians, Pakistanis together! A call in the US, Canada, India, Pakistan (September 5, 2013)

In my case, I had shot a monkey, although accidentally. I was trying to scare the bugger as he was picking/throwing around ripe and unripe mangoes in our orchards. As I fired, he jumped in the direction my shotgun was aimed at, and was hit directly, falling to the ground with a thud. I had to arrange for his cremation according to proper rites, to placate my religious, now extremely distraught, mother. I had to go to the banks of the river Ganges in Garhmukteshwara in Western Uttar Pradesh, about 15 miles from our farm. I really had to get out of Dodge for a couple of days for penance.

In closing, I strongly recommend the book based on its sterling qualities. And I eagerly await Prof. Amitava Kumar’s next book.

(Har Swarup Singh, PhD, is a former Indian ambassador to Maldives. He also served as an international civil servant, as a member of India’s Planning Commission and as a Governor of Pondicherry.)