India and US have ‘made up for lost time’: Ambassador Harsh Vardhan Shringla 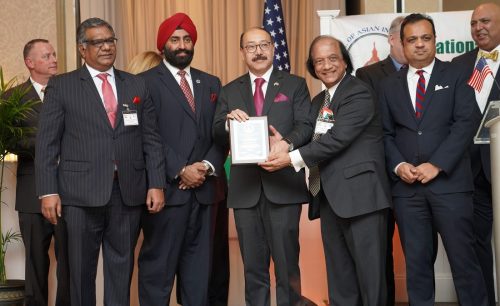 India and the United States, two democracies that did not have the best of relations for four decades during the Cold War, have since made up for the lost time, said Harsh Vardhan Shringla, India’s ambassador to the United States, on Saturday.

India and the United States “should have been kindred nations from the time of our Independence in 1947,” as they share similar values and principles as democracies, he said delivering the keynote address at an event hosted by the National Council of Asian Indian Associations, in Greenbelt, MD, to celebrate India’s 70th Republic Day.

“We had values that could have taken us forward, but I think we made up for lost time, and in the last decade or decade and a half, we have come a very long way,” Shringla, a 35-year veteran of the Indian Foreign Service, said. “And today, India and America cooperate across the board in the political side of things, economic side, in trade, energy, science and technology, and most importantly, people to people contacts.”

The event, which was held in association with the Sikhs of America, was Shringla’s first major public community event outside of the Embassy of India after assuming charge as India’s 26th ambassador to the United States. The diplomat, who was introduced by Sikhs of America Chairman Jasse Singh, was also given a welcome reception.

Shringla, who presented credentials to President Donald Trump on January 11, also praised the role played by the Indian American community in improving and strengthening the bilateral relations. “[The India-US relations] have come a long way but there is one important factor that has contributed to the relationship being where it is, and that is the contribution to the Indian American community,” he said.

Besides the Indian diplomat, a number of top officials from Maryland and the Washington, DC, area, as well as local Indian American community leaders attended the Republic Day event.

Both Schulz, a Republican, and Elrich, a Democrat, expressed their appreciation for the Indian American community and the relations with India.

Schulz pointed out that of the 19 international trade offices the state of Maryland has worldwide, one is in Delhi. “Our exports in Maryland totaled $270 million to India in 2017,” she said. “The imports … from India are over $615 million. Our relationships are strong. We’re committed to the Indian community and I am hoping you are committed to Maryland as well. We do have an international team in the Department of Commerce that works every single day to make sure that we have a strong bonded relationship.”

She also pointed out that, the Prince George’s County Economic Development Commission has been running an innovation center, specifically for the Indian business community, since 2013, which is acting as a “soft landing space for those Indian companies that want to be able to come here to do businesses in the State of Maryland.”

Elrich, a lifelong civil rights activist, described India’s independence movement as a inspiration for all the decolonization movements of the 1950s and 1960s in different parts of the world. He also cited the Montgomery County’s business ties with India.

“We have a sister city in Hyderabad,” he said. “I hope that we actually strengthen our relationships.”

He also talked about the diversity of the county. “My administration is about change,” he said. “It is going to be about inclusivity. It’s about understanding that Montgomery County does not look like me anymore. MC looks like you. Its black, its brown, its Asian, it’s a concoction of people from all over the world who bring their skills and their talents to Montgomery County. It’s our job to educate people and set those people free to be the most productive human beings that they can be.”

The NCAIA also honored Shringla, Schulz and Elrich at the event.

In his welcome remarks, Bezwada pointed out that five NCAIA members serve on various commissions of the Maryland governor.

Deputy Chief of Mission at the Embassy of India Santosh Jha, Dr. Jaideep Nair, Minister (Consular Services) at the embassy, and Senior Vice President for Academic Affairs at Montgomery College Dr. Sanjay Rai were among other dignitaries who attended the event.