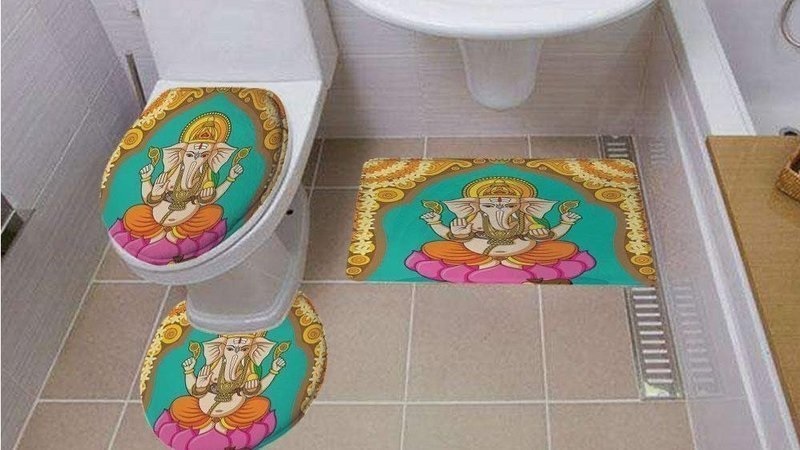 The petition demands apology and withdrawal of products by Amazon, which has listed a range of floor mats and toilet seat covers depicting Lord Ganesha.

Featuring religious figures on lifestyle products has always been a touchy subject. Recently, online retail giant Amazon gathered the ire of a lot of Hindus when products depicting Hindu Gods in a derogatory way were listed for sale on the portal. Under the scanner are a range of bath mats, floor mats and toilet covers depicting the Hindu God Ganesha.

Irate believers have also started a petition on Change.org. The initial goal of the petitioner was to get 150,000 signatures, but later the target was increased to 200,000. By 9 am on Friday, it received nearly 156,000 signatures from people across the globe.

The petition, launched by someone named Ankur Tuteja, says: “Amazon.com have insulted the Hindus across the globe by allowing sellers to sell Kitchen rugs, Door mats and Toilet covers showing HINDU GODS. Demanding that Amazon issue a [sic] Apology immediately and remove / blacklist these sellers ASAP.”

On Thursday morning, the petitioner thanked the supporters for “their overwhelming” support. Tuteja wrote: “The petition also gives links to the products that are being considered offensive: bathroom mats with a dancing Ganesha motif and another bath mat with a Buddha figurine. Dear Supporters – Thank you for the overwhelming response and signing the petition. This clearly shows we Hindus cannot tolerate such cheap way of doing commercials by inappropriate content and use of Hindu Gods. We have partial VICTORY! Amazon has taken down and removed some of the product listings that were listed on petition. But there are few yet to be removed. Please continue to share and pass on this petition across the globe to gather support.”

Alleging that no action has been taken against the original seller, the petition demands an apology from Amazon.

Hinduism emphasizes a lot of reverence to religion-based figurines as well as the gods and goddesses. In the past, a number of products retailed via western websites or by western designers have created furors over sacrilege to religious icons.

Amazon itself had to withdraw some of its products after protests from the Hindu community in the United States. In January 2014, it removed a controversial pair of pants that featured Ganesha from its catalogue.

“Ganesha’s Hot Dream Pant” was manufactured by the company Teeki, which specializes in active-wear and yoga clothing.

Urban Outfitters, which marketed Ganesha socks, issued an apology and pulled them off shelves, stopping sales after a backlash. The feet are considered impure in Hinduism and making a sock with a God on it one of the worst kinds of clothing offenses possible.

As the American Bazaar reported in December 2013,  beer manufacturer Asheville Brewing and singer Selena Gomez were also under fire for offending Hindu sensibilities that year. Here are excerpts from that report:

Asheville stirred up trouble by featuring the Hindu God Shiva on labels for one of its Indian Pale Ales (IPA) beer lines. The small craft beer company was immediately inundated with emails and calls from vocal sections of the Hindu community, urging that the sacred icon not be used in conjunction with an alcoholic beverage.

While Asheville Brewery admitted their mistake, they also said that they wouldn’t change the label. Located in Asheville, North Carolina, the Shiva IPA is still available at their three locations around the city, and carries an ABV of 6.0%.

A similar story occurred in Australia, when Brookvale Union Brewery released a line of ginger beer that had an image of the Goddess Lakshmi on its label. However, in this case, the company swiftly apologized for the perceived religious slight and made amends, changing the label to remove any potentially offensive imagery.

“We’re lovers, not fighters, we want to make it right,” they announced last month, when the scandal occurred. “With recent feedback brought to our attention, we will be looking at design options for our bottles.”

Actress and pop star Selena Gomez also found herself in the crosshairs of a vocal group of Hindus when she appeared wearing a bindi during performances of one of her songs, “Come and Get It,” which features Indian and Bollywood influences in it.

The performances occurred back in April, when Gomez was on a world tour to promote her recently released album, but she was not alone. Several American celebrities, including Gwen Stefani and Katy Perry, have taken to wearing variations of the bindi as a fashion statement. In an interview with Billboard, Priyanka Chopra was asked what she thought of a Hindu element like that being used so casually by those who weren’t followers of the faith.

“I think it’s great that musicians are discovering the beauty of the bindi,” she said. “In today’s day and age, the bindi is not restricted to religious or traditional purpose.”

Those are some of the more high-profile examples that occurred in 2013, but those and several others that may not have received the same amount of coverage go toward showing that the misappropriation of Hindu deities for modern products is becoming a growing problem. Companies are becoming increasingly cavalier in their usage of religious imagery on potentially offensive products.