Opinion: Race- and ethnicity-based admission policies adopted by America’s elite schools are immoral and against principle of equality.

In this country, ballyhooed by arguments of equality for all races and ethnicities, the Asian Americans (the definition of which includes Indian Americans) have become the new race group to whom it is perfectly acceptable to ignore and discriminate against. Do not worry much, they will never protest in the streets and cause a scene, so go ahead, ignore them!

The Asian American Coalition for Education (AACE) was formed when a case against Harvard University was filed with the Department of Education by a coalition of more than 60 Asian American organizations. Then, in May 2016, AACE filed a similar case against Yale, Brown and Dartmouth, this time with 120 signatories.

As the then-president of ASEI-NCC, the National Capital Chapter of ASEI, an organization of Indian American engineers, I was invited by AACE to speak at the National Press Club here in Washington, DC, in May 2015 and again in 2016. ASEI-NCC is one of the signatories to this complaint.

In the First National Conference on Equal Education Rights, held on May 20, 2019, at the National Press Club, AACE challenged policy makers, researchers, educators, journalists and concerned citizens to look at the big picture of equal education rights: America’s competitiveness in education, the real purpose of American schools, the root cause behind a lack of racial diversity, the ineffectiveness of racial preferences and the roles of the federal government and the media. AACE urges America to develop effective, racially harmonious and sustainable education policies.

If you’re applying to any of the Ivy League universities and your last name is Wong or Patel, changing it to Smith or Lopez might just make the difference you need to get in. (They do have caveats to catch such identity thieves!) They routinely reject “Asian” applicants in favor of whites and sought-after minorities like African Americans and now Hispanic Americans, with lower test scores and grades.

Enrollment data reveal that Harvard limits Asian Americans to a flat 18-20 percent of the student body, year after year, though they increasingly dominate the top of the applicant pool. The past year it was increased to 22 percent due to such pressure.

To smoke out ethnicity, Harvard requires applicants to provide their parents’ place of birth, mother’s maiden name and whether their family has ever changed its surname. These questions, along with an interview requirement, were devised in the 1920s to limit the number of Jewish students. Now Asians are the new Jews, welcome only in limited, tolerable numbers. It was deemed unacceptable then. But it has been deemed perfectly acceptable now to have the same covenant for Asian Americans.

Even the US Supreme Court agreed. So go ahead and discriminate against them, it is quite kosher to do so! Many other Ivy League universities have followed suit and devised their own methods to do the same.

That something not too kosher is being intentionally done here is obvious from the following four points. That all the Ivy League schools are bunched up together (see the charts below) in their enrollment percentage also appears like “collusion” at some stage, to hold them near that level by all schools shown here despite a substantial increase in number of Asian American students in the 18-21 age group. 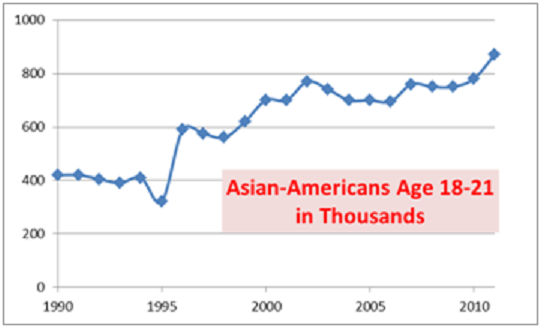 Yukong Zhao, president of AACE, raised several important questions at the May 20 conference. They are worth pondering:

Is there a quality gap, or a racial achievement gap in the US education system? Are there both? What is the root cause of a lack of racial diversity in higher education? Is it meritocracy or a K-12 education that is failing too many minority communities? Are Asian American children less valuable or are they scapegoated? What is the purpose of American schools and colleges — education or social engineering? What is the role the federal government — racial balancing or equal protection of the laws? What is the role of the media — communicating facts or pushing for ideological agenda? How can we develop racially harmonized and effective educational policies?

The large proficiency gaps shown in the graphic above between Asian American, African American, Hispanic and White pre-teen children highlight the age range where it starts and that we need to attack, rather than at the end of the pipeline. By then the damage is done. Punishing Asian American students then at the college entrance level is a quitter’s way of putting a Band-Aid.

We, as a society, also need to ask ourselves frankly and honestly what is the root cause of a lack of racial diversity in higher education. Is meritocracy resulting in a lack of racial diversity? Is standard test racist? Why the K-12 education is failing too many black and Hispanic communities? Is it because of the dumbing down in academic standards? Is teacher’s union to be blamed for that? Are crime, poverty, broken families to be blamed?

Another major concern is the leaking STEM (Science, Technology, Engineering and Math) education pipeline. STEM competencies are going to be primarily required as the United States is going to have to compete strongly against other countries to maintain our status as the foremost innovator country as well as a way of life here. The “quantity” which has and will suffer through reductions in STEM competencies is one aspect. Quality is another issue which we cannot afford to continue to dilute. It is not going to be a picnic in the future; we need to take very seriously the need to be fully prepared and an appreciation for merit will be a key to that. China has beaten us to the punch by landing Chang’e 4 on the Lunar farside at the South Pole. It is not certain that we will be able to be ahead of them on further explorations, discoveries and ISRU (In Situ Resource Utilization) in the Solar System.

There is also another significant consideration. The problem is larger — this is just the tip of the iceberg. To a large extent, what the Ivy League schools are doing is a reflection of what the American society at large thinks of us and how it treats us.

Asian Americans are a visibly different looking minority. When you see us, you can tell. New African or European immigrants, of just a few years, will be immediately accepted and believed as Americans and disappear in the American fauna. We are not afforded the same benefit, even if we have been here for many decades or many generations even. Darn it, we just look different!

From 1999 to 2019, 26 Indian American kids have won the Scripps National Spelling Bee, and several more finished within top three. But when Hollywood made a movie on this subject in 2006, called Akeelah and the Bee, it was not about Indian American kids but about an African American contestant. Why? We can spell but we do not count? In fact, that story line may even have been more interesting and unique to Hollywood, but they chose to ignore it. And how would the country have reacted if the roles were reversed? The two co-champions for years 20014 and 2016 and the champions for 2017 and 2018 were all Indian Americans as well. And as if that was not enough, this year, 7 of the 8 co-champions are Indian Americans. Shouldn’t Hollywood find this exciting enough as a development to make a movie called “Shruthika and the Bee”? (Shruthika Padhy is one of the 7 Indian American champions this year.) Hollywood, aren’t there other visible minorities in this country that matter? Please wake up and smell the chai!

Are these examples more than merely a reflection of what Hollywood does to emulate what it perceives to be prevalent in society at large? Or, more painfully, was it actually an interpolation from a more generalized sentiment? Yes, you can come and work here perhaps, but, about being part of the society here, oh, we are not too sure.

Martin Luther King, Jr said: “I look to a day when people will not be judged by the color of their skin [race], but by the content of their character.” These Asian Americans students are trying very hard to improve the content of their character, and they are still being judged based on their race by these Ivy League universities, effectively being punished for their race. Isn’t this how racism is defined?

Our college admissions system should be primarily merit-based. This is supported by an overwhelming majority of Americans. According to a 2016 Gallup Survey, most Americans (70 percent) continue to believe colleges should admit applicants based solely on merit, rather than taking into account applicants’ race and ethnicity in order to promote diversity (26 percent).

It is further validated by the Pew Research Center Survey of 2018, which finds that most Americans (73 percent) say colleges and universities should not consider race or ethnicity when making decisions about student admissions.  In the same survey, most Americans also reject the use of legacy, athletic, gender and other non-education-related criteria for college admissions.  Only a race-blind, merit-based college admissions process can truly achieve equality to all Americans.

On his Netflix show a few months ago, Indian American comedian Hassan Minhaj termed Mr. Zhao, myself and other board members of AACE as “the worst kind of Americans.” Our suggestions are to go by merit, and hence you will never see anyone of us pushing for equality by numbers in basketball or football! But you, Mr. Minhaj, are the one cutting off the feet of Asian American kids by not allowing to reward them for one of the things they do best, academic excellence, through hard work. Who is the worst kind of American?

(Dr. Ajay Kothari is a Member of the Board of AACE. The author acknowledges and thanks Yukong Zhao, the President of AACE, for some information used herein that was supplied by him.)

25% increase in number of Indian students in US; desi students prefer STEM fields