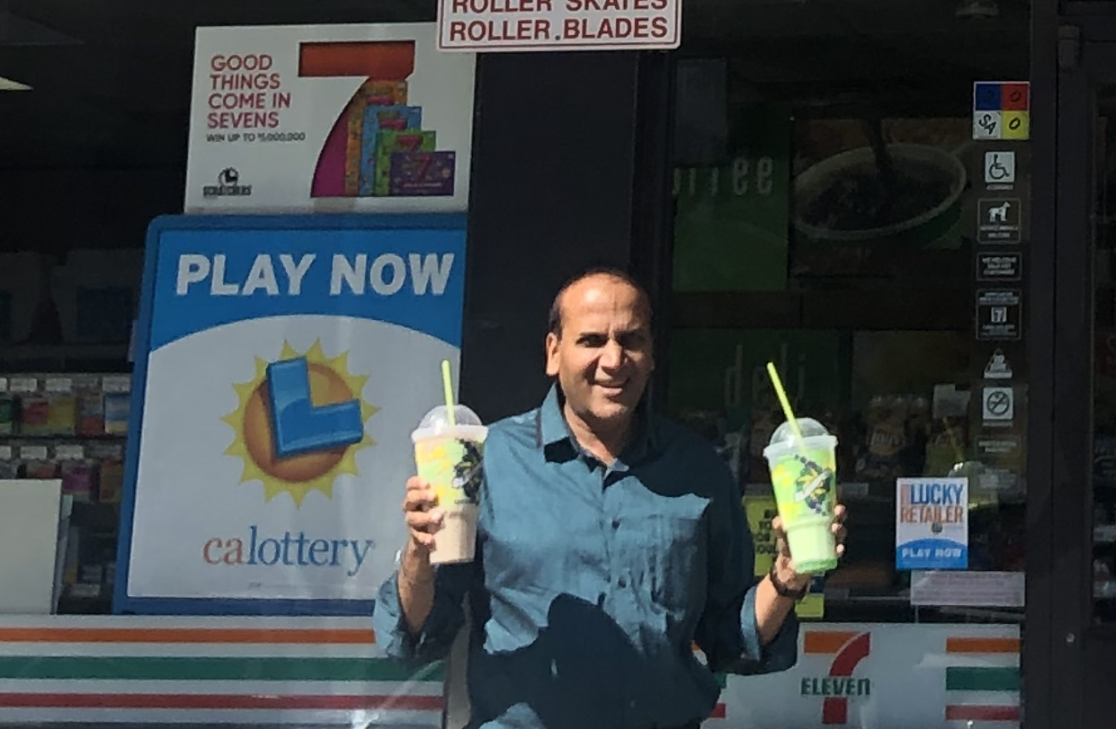 The motto of Seven Eleven should be, “We give you diabetes, one Slurpee at a time.”

In July, we celebrated a major national holiday. July 11th. It was not America’s or India’s Independence Day, but a cause for great celebration for many Indian Americans. 7-11 was giving out free Slurpees on 7-11. That week, I was doing open mikes at my favorite place in Los Angeles, Fourth Wall. It has two locations in Los Angeles: one in North Hollywood and another one in Koreatown. Both of them happen to be next to 7-11 stores. I noticed that the colors of 7-11 are the same as the Indian flag. An orange stripe on top, a white stripe in the middle and green at the bottom. I think it was a strategic decision by the founders of 7-11 to entice Indian Americans into running the popular American kirana stores. It worked because Indian Americans have done that job very well.

The requirement to open a 7-11 franchise is simple. You should be willing to put some money upfront and promise not to delve into luxuries such as having a social life. Family is important but you should convince your family members to come and work with you and support you at the stores. Finally, you should be willing to work from 7 to 11. Indians by nature are over achievers so they have expanded the expectations to 7/24. 7 days a week, 24 hours a day.

If one analyzes the business model of 7-11, it is basic. Sell processed food that is not good for you. You can sell that at a higher price because of the convenience of location and time. The ever popular extra large Slurpees have 16 teaspoons of sugar. The motto of the store should be, “We give you diabetes, one Slurpee at a time.” There are other processed foods that have me wondering each time I go to a 7-11. Have you ever considered how long that hot dog has been rotating in the rotisserie? As long as it takes to sell. In some stores, it may have been rotating since Easter; the original Easter when Jesus Christ came back. In fact, he may have come back for that reason. “Thou shall not eat that hot dog. It is the 8th deadly sin.”

Some American comics have heckled me during my stand-up and asked if I feel guilty about having my countrymen sell beef jerky. I tell them, “Our people didn’t kill those cows. It’s your people that treat cows like crap. You kill them, you package them and then you provide them to our store owners.” In fact, my son, Vicktor, has a joke on the same topic. He says, “Indian cows are holy. These are American cows. They are treated like crap anyway.”

I tell my fellow American comics that there is a sophisticated business model at work here. It is akin to the Indian mafia. After eating a lot of bad food, when people get sick they see a doctor. Indian Americans dominate that field. One out of four doctors in the US is an Indian. Personally, I don’t like Indian doctors, especially Hindus. I am not trusting my life in someone’s hands who believes in reincarnation. Our people don’t own many hospitals … yet. We do own a lot of hotels and motels.

When the patients get hospitalized and when their relatives visit them, they stay at our hotels. In addition, when people are not able to pay their bills, our people help in financial planning because we are good in numbers.

Finally, after getting hopelessly entangled in the maze of bills, dealing with hospitals and insurance companies, people get depressed and they need to find the meaning of life. They come to us and that is where we outshine everybody. We invented things like meditation, mindfulness and being “present.” Look at the fortune Deepak Chopra has made serving as a New Age Guru. People cannot get enough of him. This sophisticated system works well and supports our people working at each level like the ancient Indian class system. We have got it covered from 7-11 to Heaven… and every step in between.

Have you ever noticed any Indian people shopping at 7-11? We don’t. We are out shopping at Costco getting the deal of the century. We are getting an 84 pack of bagels and a tub of cream cheese for a dollar. With the money we save, we go to Whole Foods to get fresh and organic food that nourishes our body and soul.

We are able to do all of this because we just follow the rules. One of my favorite quotes is that the difference between communism and capitalism is that in communism man abuses man. In capitalism, it is the other way around. Our people are just following the rules. Until the FDA sets a ruling that after a thousand spins, that hotdog is too dizzy to be eaten, our people will continue selling it.

The success of 7-11 is because many American people are gullible buying overpriced foods that are not good for them in the long term. People are so loyal that they regard Slurpee as a national treasure and would not mind declaring 7-11 a national holiday. Over a period of time, with sophisticated marketing, 7-11 has become omnipresent, omniscient and omnipotent. I would not be surprised that they even lobby and succeed in adding the 28th amendment to the constitution: The right of all Americans, legal or illegal, to bear a Big Gulp Slurpee on July 11th.