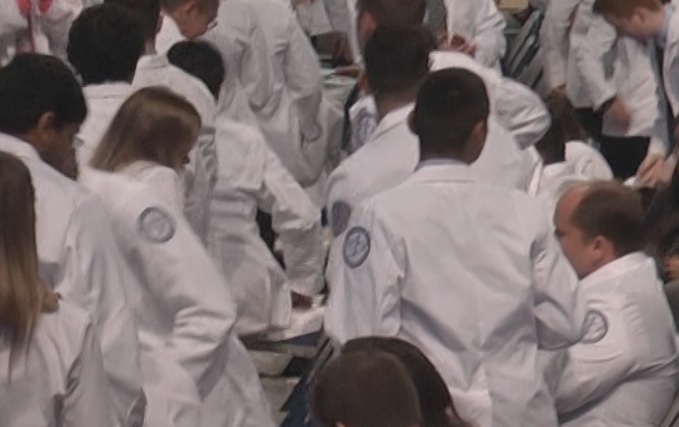 An unending wait for most qualified immigrants working in America’s under-served cities.

Dr Tejaswi Bhari who lives and practices as a physician in Coffeyville, Kansas has been in the US for 20 years now. As a family medicine practitioner, he has spent ten years serving locals in some of America’s most under-served cities facing acute health challenges.

However, as someone who has contributed immensely not just to the American society, but to the economy as well, a permanent US resident status still eludes him.

Bhari, is on an H-1B visa and is in line for the Green Card which may take up to two decades before he can call himself a permanent resident. He is among a growing group of Indian physicians in America, who feel shortchanged by current US immigration policies.

According to new data published Jan 23 by the Association of American Medical Colleges (AAMC) the US will see a shortage of up to nearly 22,000 physicians by 2032 as demand for physicians continues to grow faster than supply.

While rural and historically under-served areas may experience the shortages more acutely, the need for more physicians will be felt everywhere.
RELATED: For those who got caught in green card backlog, the current debate is not just academic  (July 23, 2019)
The overall supply of physicians will need to increase more than it is currently projected to in order to meet this demand, the AAMC report says.

Most doctors of Indian origin in America, often sacrifice their family lives to practice in smaller pockets with virtually no social lives. Many say they have to go through numerous visas before coming anywhere close to the green card.

“America is doing itself a disservice by denying permanent residency to the deserving,” says Bhari.

“As a physician in America,” he says, “I opted for a J-1 waiver, which meant that I would have to work in an under-served area in the US for three years before I could qualify for the green card.”

“I took up the offer knowing full well that working in under-served areas especially as a physician of color comes with many challenges.”

“I started with Allendale, Arkansas,” Bhari said. “The thing with most under-served places is that these are small, sleepy towns with smaller populations and poor health awareness amongst the locals.

“There is also almost always an initial resistance towards an immigrant doctor. If truth be told, most American doctors do not prefer to work in under-served areas. However, many Indians and Caucasian doctors take up the challenge.”

During his years in under-served areas, Bhari realized the problems faced by the communities first hand.

“In most areas, the population we are treating is financially challenged,” he said. “There is poor health literacy among people and they are also non-compliant to health advisories.”

The irony according to Bhari is that “Despite my work and the fact that I have paid a million dollars in taxes in the US, the country still does not think that I should have a fair route to green card.”

“As an Indian, under the per country cap backlog I have to wait decades before calling America my home.”

Bhari admits that he may still be in a better position than many others as both his kids are American born and he does not have to worry about them aging out before the family gets their green card.

But for Dr. Swapan Swamy, the problems are manifold. Just like Bhari he too has invested in America and has worked in rural places, but for the fear of his kids aging out the family has now decided to move to Canada.

Even though, the Swamy family has been in the line for over ten years now, they are left with no choice, but to let go and move to a more welcoming place rather than waste their years wondering about their future.

“I do not care about a green card any longer. It’s a joke,” he says. “We have been living and working honestly and we are denied basic rights such as future security for our school going children. We do not want to face family separation after years of living and loving the US.”

About 300,000 Indian legal immigrants are a in a long line for green cards. Many face a decades long wait before they may get permanent status.

“Contrary to popular notions, we were not told that our wait would be that long,” says Swamy. “Any reasonable man would choose another country rather than getting stuck in unending lines.”

A majority of his colleagues on H-1B visa feel they deserve a faster route to residency, says Swamy. “We are in specialty occupation, we contribute to the society. But we are made to feel like beggars asking for a residency.”

“If the American attitude is that we can go if we do not like the wait here, then my answer is yes, we will go but there will be an acute shortage of physicians in rural America.”

“For those who say that due processes should be followed must know that under EB-5 category one could invest millions of dollars and get a fast track green card. Is it not like selling green cards?” asks Bhari.

Indian doctors maintain that they do not have anything against physicians from any other nationality getting faster green cards. All they ask for is not to discriminate against the country of their birth.

Will Trump’s proposed immigration reform benefit Indians? What will be its impact on Green Card backlog? (May 20, 2019)