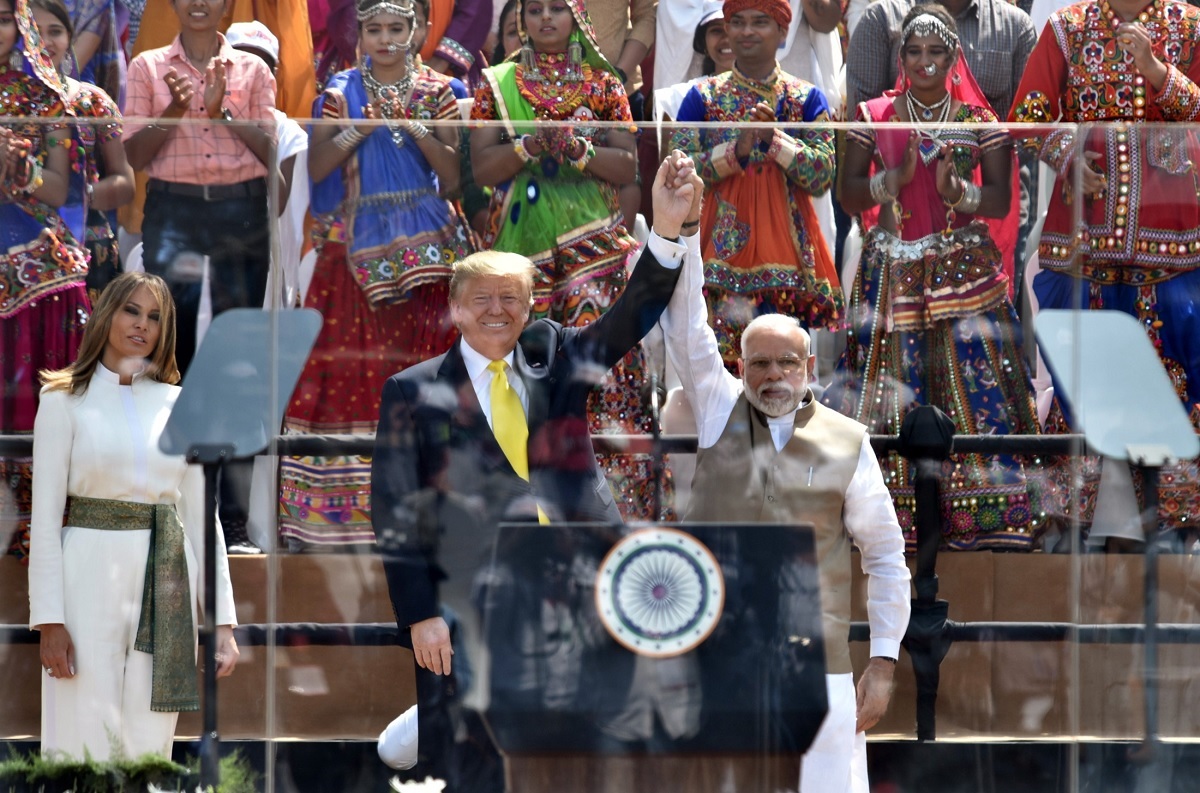 After taking in the sights and sounds of India, Trump, Modi to talk business on Tuesday.

He came. he saw, he hugged and was mighty pleased to see the grand spectacle that his “great friend Prime Minister (Narendra) Modi” had laid out for him as promised.

Maybe there weren’t “seven million people” that he expected out on the streets of Ahmedabad, to greet US President Donald Trump and first lady Melania Trump on their maiden trip to “incredible India.”

But from the moment the first couple, he in a dark suit with a bright yellow tie and she in a white jump suit with a green sash tied at the waist, came down the stairs from Air Force One, they were witness to unparalleled pomp and pageantry.

As Trump and Melania walked down the red carpet after several hugs and handshakes on the tarmac, they were greeted with sounds of conch shells, drum beats and folk dancers in their traditional colorful dresses.

If not millions, tens of thousands of people had indeed lined up the spruced up streets decorated with huge billboards and cutouts of Trump and Modi for a roadshow as the visitors’ motorcade wended its way to Sabarmati Ashram.

At Mahatma Gandhi’s abode for 13 years, from where the leader of India’s non-violent independence movement, led the famous Salt March in 1930, Trump and Melania spun some thread on a charkha (spinning wheel) and a takli (support spindle).

On to Motera, said to be the world’s largest cricket stadium, for ‘Namaste Trump’ spectacle, billed as India’s answer to ‘Howdy Modi’ event in Houston last September where some 50,000 Indian Americans had greeted the two leaders.

After more bearhugs and hand shakes from Modi, Trump spoke to a cheering crowd of his great friendship with Modi and India, striking all the right notes talking about Indian icons from saints to stars to sportspersons.

From Swami Vivekananda, who introduced Hinduism to the Americans, to famous Bollywood flicks like ‘Sholay’ and ‘DDLJ’ (Dil Wale Dulhaniya Le Jayenge) to cricket legends Sachin Tendulkar and Virat Kohli, he remembered them all.  Nor did he forget the contributions of Indian Americans.

While an “incredible” trade deal may have to wait, Trump was “pleased to announce” that the US will Tuesday “sign defense deals worth over $3 billion to sell the absolute, finest state-of -the-art military helicopters and other equipment to the Indian armed forces.”

Trump then took off for Agra in Uttar Pradesh, where after another round of tumultuous welcome by folk artistes and enthusiastic crowds, the first couple went for a wondrous rendezvous at that monument of love, the Taj Mahal.

Walking leisurely hand in hand taking in the beauty of the architectural marvel commissioned by Mughal emperor Shah Jahan in memory of his wife Mumtaz Mahal, the smiling couple stood before the historic wonder time and again posing for pictures.

President Trump and Melania then flew off to New Delhi for a quiet night ahead of official talks Tuesday when the author of ‘The Art of the Deal’ meets his “great friend” India’s “chaiwala” (tea seller) turned “tough negotiator.”

Trump, Melania have a rendezvous at Taj Mahal on India visit (February 24, 2020)

Trump retweets himself as Bahubali as he sets out to win India (February 23, 2020)

Tanvi Madan: With Trump, Indians ‘recognize that they do need to put something on the table (February 21, 2020)