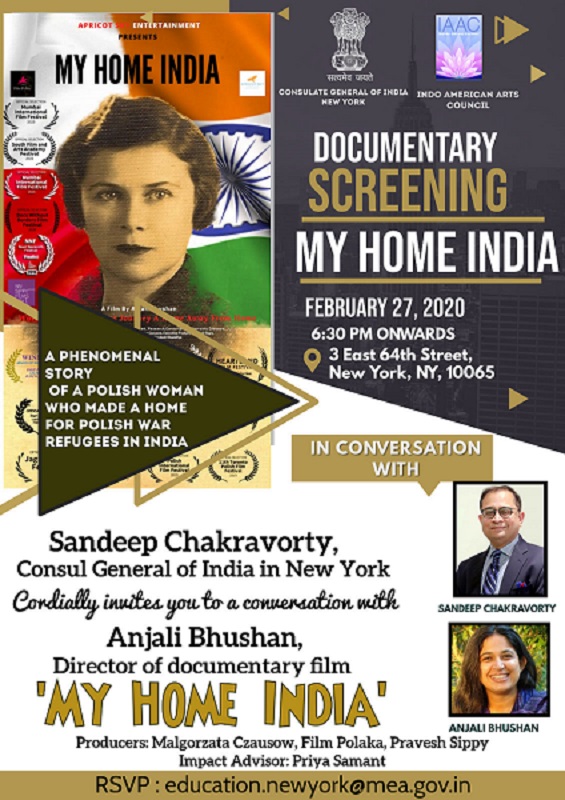 Migration in the history of human existence, is a powerful reminder that life connects all of us in ways unexplained and often unfathomable.

Taking out a slice from the history of World War II that affected millions of people then as well as the future generations is an enchanting new documentary entitled ‘My Home India’.

Sandeep Chakravorty, Consul General of India in New York, hosted a screening of this important piece of history with a conversation with director Anjali Bhushan at the Indian mission on Feb 27.

‘My Home India’ is an important story that connects Poland to India during World War II. While historians have documented and how the war shaped the new world, Bhushan took out a little riveting detail from those times to document how a population from Poland managed to find its way to India and made India its new home.

The screening at Indian Consulate General in New York was a well attended event. The audience included diplomats and representatives from Pilsudski Institute of America as well as members of the Indian American as well as Polish American communities.

Both the audiences had enough to relate and connect with the strong story line that traversed across decades and generations to establish how human connects are formed to places and people during the toughest times.

After the screening, Bhushan had an engaging question and answer session with the audiences, who were impressed to see this important piece of history brought to life.

It is perhaps for the first time that this subject has been brought to the attention of people and outside of Poland, almost very little is known about the life and existence of those Poles who were able to escape the Soviet Siberian labor camps.

In an interesting analogy, that explains the Polish influence in some parts of India, the documentary shows how these Poles found their way to India.

The film also highlights an important Polish lady in the history of this ancient migration – Kira Banasinka. She was the wife of Eugene Banasinski, the first Polish Consul General of Poland in Bombay.

Intertwined within the story of how Kira and her husband, 18-years older to her found love and her life as a diplomat’s wife that revolved around social engagements, is another powerful tale of how she ensured that hundreds of thousands of Poles found a safe passage to India.

The story is about one woman’s will to provide safe space to thousands of Polish refugees of war.

It’s a must watch for anyone who is interested in history and everyone who wants to explore how people find connect to new places.