A Burning, the debut novel of The Indian American author Megha Majumdar, tells the story of an India tearing its social fabric apart.

A Burning by Kolkata-born Megha Majumdar is a debut novel that takes up characters caught in the searing environment of a looming Hindu Rashtra under a right wing Bharatiya Janata Party (BJP) government.

It probes into a changing political and social environment in which it is no longer possible to stay neutral or above politics. It’s about a country with an advancing Hindutva ideology that is battling to tear into the soul of India, as opposition Congress politician Shashi Tharoor once put it. 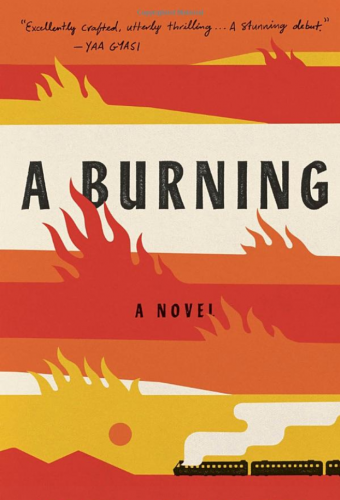 Majumdar came to the United States to study at Harvard as a Traub scholar. She went on to pursue graduate school in social anthropology at Johns Hopkins University. Currently, she is working as an associate editor at Catapult in New York City.

The plot traces the rise, aspirations and dreams of three protagonists from different religions, genders, classes and ideologies.  It examines the idea of a New India that is changing face and effacing an earlier India, which was about morality, inclusivity and expansion.

Jivan is a Muslim girl from the slums, determined to move up in life and extricate herself from her impoverished life. One thoughtless comment in Facebook about police responses to a terrorist attack on a train drags the English tutor into becoming part of the accused.

An important person in her life is her a gym teacher, “PT Sir,” who is determined to climb up through political affiliations to a right wing ruling government, but gets inextricably linked to Jivan’s imprisonment and fall.

Much of the book is based on monologues by Jivan narrated to a reporter, Purnendu.

The third main character is Lovely, who identifies as a marginalized non-binary. She raises an enthusiastic voice with dreams of glory and fame in the movies, but gets suddenly threatened when she is called upon to provide an alibi that can help set Jivan free. Will she do it?

The story reflects the chaotic, diverse atmosphere of an India that was born on just an Idea of secularism and democracy, but is now teetering on the edge due to threats from the majoritarian political party.

It has radicalized entire generations today, with most people turning a blind eye to the excesses committed by the government and support for whatever the rulers unleash on opponents.

The novel has won acclaim for its taut, gripping and powerful prose, which tears into the political character of a government that relentlessly attacks minorities, especially Muslims.

Turning democracy on its head, the right wing government flays writers, activists, academics, journalists, students and all opponents, ironically labelling them as “intolerant” and “anti-national.”

Majumdar’s novel is a window to an India that is burning. It’s a cauldron of diversities, which are all pulling in different directions with many resisting a central, dictatorial, unifying order to coalesce into a Hindi, Hindu, Hindutva Raj.

The novel is an introspective self-examination into the after-effects of a disaster that cannot get resolved because it accuses and imprisons political prisoners who have no links to the incident apart from stray comments on social media.

The novel has won accolades for its fine literary exposition. Noted author Amitav Ghosh describes it in a preview as “the best debut novel I have come across in a long time.”

“Somehow Majumdar succeeds in capturing the boundless energy and starry-eyed hopefulness of the country’s youth,” he writes. “A Burning signals the arrival of a new voice of immense talent and promise.”

A Burning, then, is more than just a thriller or a whodunit about a train crash. It is also about a country that is burning and tearing its own delicate social fabric apart.

Here are some notable reviews of Megha Majumdar’s debut novel:

Majumdar has a gift for using small details and fleeting incidents to nudge her fiction into larger suggestion. Sometimes it’s a phrase—walls “plump with damp”—or a poignant shorthand, like the one with which Jivan evokes her mother’s awkward inaccessibility at home: “Then my mother cooked, hidden in the kitchen. An atmosphere of smoke and chili about her deterred conversation.” …

Through the gaps that open up among and behind these three characters, a large Indian panoply emerges. The book’s surface realism—that great boon to writers—is abundant and busy and life-sown: muri wallas, pillow-fillers, guava sellers, a man who grinds tobacco in his palm, not to mention theatrical agents, schoolteachers, hijras, criminals, and criminal politicians. But the system that at once supports and undermines this diverse vitality is seen with an unrelentingly cold authorial eye, in all its small and large corruption, its frozen inequality, murderous racism, political opportunism, and unalleviated poverty.

In her captivating debut novel A Burning, Megha Majumdar presents a powerful corrective to the political narratives that have dominated in contemporary India. Under Prime Minister Narendra Modi, artists and journalists have faced pressure to toe the Hindu nationalist party line. ..  Majumdar, who grew up in Kolkata and is now an editor in New York City, tackles this turmoil head-on. India’s brand of nationalism has its particularities, but readers around the world will recognize the rightward turn charted in A Burning, with schools criticized for failing to teach “national feeling” and minority communities seen as “disloyal to the values of this nation.