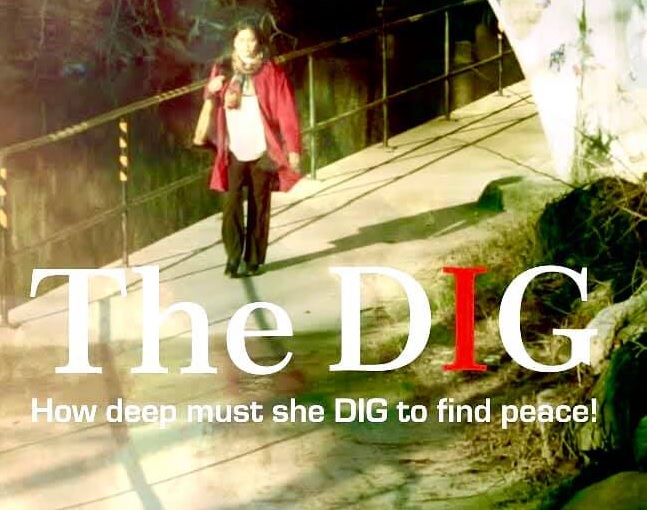 This week, till June 20th, a group of very talented local actors, writers, filmmakers and technicians will be showcasing their short film works online for your enjoyment. One of the films that made its premiere over this past week was Mansoor Ahmed’s The DIG, starring Sangeeta Agrawal, Rajiv Paul, Sri Mirajkar, Neeta Datt, Chetna Gola, Hema Ahmed, Stuti Bannerjee, Shubhankar Bannerjee, Saisha Vyas, Suresh Agrawala and Rajeev Agrawal.

Without ruining too many details, The DIG tells the tale of a woman, Aisha (Sangeeta Agrawal), going through a deep emotional trauma. Via her memories, we slowly learn the issues that have plagued her and which ultimately bring her to a shocking decision.

To the performances, this piece belongs completely to Sangeeta Agrawal she performs effortlessly and there was not a single false note in her expressions. It is extremely challenging to emote only facially and convey all emotions without a word, and she does so like a pro. All of the other actors have provided amazing expressions with their voices via Aisha’s memories as well, another challenge when just using your voice to convey emotion without being seen. It is always refreshing to see Rajiv Paul on screen with his amenable presence. While his part is brief, his moments also reveal the depth behind his character’s understanding of Aisha’s predicament.

The story by Mansoor Ahmed and script by Hema Ahmed must be applauded. It holds a great message about the human conscience. While Aisha harbors so much pain and takes an action in the heat of a moment to come out of a tough situation, her humanity also weighs strongly on her mind. She knows ultimately what the right thing to do is and she uses that to drive the conclusion of the film in a moment of courage.

The direction by Mansoor Ahmed is pitch perfect. Everything is conveyed through silences and facial expressions, which is an experiment that proves to be interesting because it showcases that in a film, dialogue is completely unnecessary if you have a strong script and great actors with great facial control of expressions. It must be commended that this risk was taken on this powerful film, which pays off.

I would be remiss if I do not recognize the cinematography work. The hues of the film convey the melancholy of Aisha, and the chilling natural and isolated visuals further accentuate her dilemma and pain. A true masterstroke by the team!

I strongly recommend folks check out The DIG. It is a unique cinematic piece that film lovers should certainly experience!

To see all of the other wonderful films at the festival, click here: https://vimeo.com/showcase/7214951