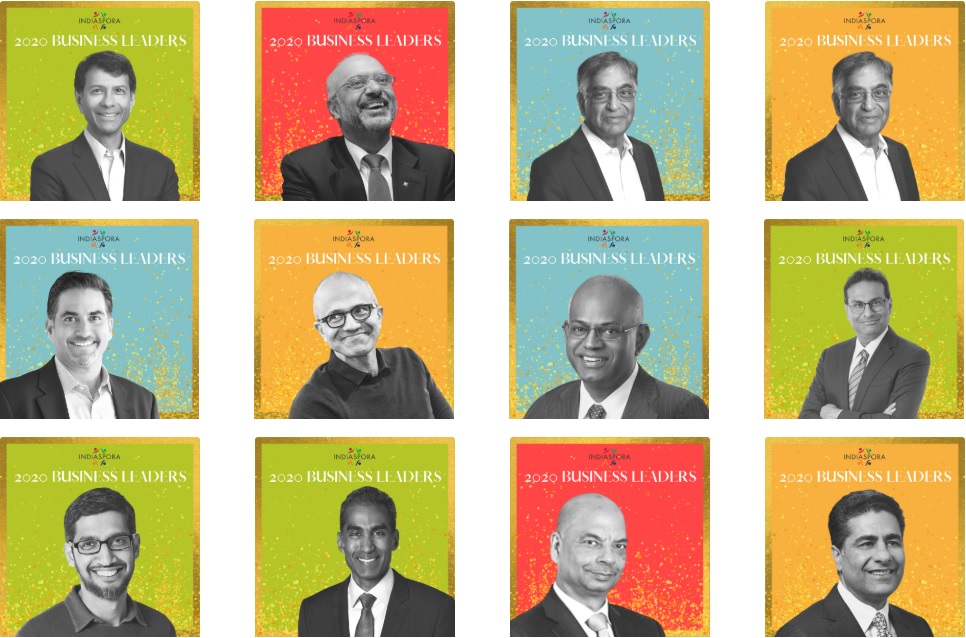 Based in 11 countries, including the US  and Canada, they have over 3.6 million employees.

Indian diaspora leaders are reaching the pinnacle of corporate success in greater numbers than ever with 58 of them leading the largest global corporations with a combined $1 trillion in revenue and $4 trillion in market capitalization.

Headquartered across 11 different countries including the US, Canada, England, and Singapore, these companies collectively employ more than 3.6 million worldwide, according to Indiaspora, a nonprofit organization of global Indian diaspora leaders.

Drawing from the latest editions of Fortune and Forbes US and global lists, the 2020 Indiaspora Business Leaders List includes 58 executives serving at the helm of their respective companies as Chief Executive Officer, President, or Chairman of the Board,

These companies delivered annualized returns of 23 percent during the tenure of these executives, outperforming the S&P 500 by 10 percent, according to the Indiaspora’s inaugural business leaders list released in Washington Wednesday.

“We wanted to capture this incredible feat that our community is achieving with increasing numbers,” said Indiaspora Founder MR Rangaswami, a Silicon Valley-based entrepreneur and investor.

“The impact that the Indian diaspora is having in the realm of business is remarkable. It’s one of the reasons we launched this project, and we hope our lists will continue to raise the profile of those who have reached the very top of their fields while also serving as agents for positive change.”

The list includes immigrants from India as well as professionals born in countries such as Uganda, Ethiopia, England, and the US

“There used to be only a handful of us leading corporations. Now that we are reaching prominence, I am eager to see how the next generation leaves its own legacy.”

Gupta, an Indiaspora member, serves as Chairman of two companies on the Business Leaders List, Aptiv and Avantor.

He is one of the first executives of the Indian diaspora to join the ranks of corporate leadership along with pioneers such as Indra Nooyi of PepsiCo and Dinesh Paliwal of Harman International.

“It’s inspiring to see so many leaders of Indian heritage playing a significant role in business and in society,” said Ajay Banga, President and CEO of Mastercard.

“Our culture and our values are a common starting point,” he said. “But it’s what we do with the opportunities presented to us that make a difference. When we lean into our diverse experiences to deal with challenges like the pandemic or racial injustice, we can have an even greater impact on the lives of those around us.”

Many of these diaspora executives have led their companies in advancing social change by addressing racial injustice, climate and sustainability justice, and the disproportionate effects of covid-19 through policy and financial commitments.

For example,  Alphabet CEO Sundar Pichai has announced new goals for racial equity and many of companies have created or contributed funds in response to covid-19, with monetary and humanitarian aid totaling more than $400 million

The Indiaspora Business Leaders List also calls attention to the presence of a glass ceiling that women, including Indian women, still face.

Out of 1,000 companies represented on the Fortune 500 list, only 61 have women CEOs; the Indiaspora List has a marginally higher percentage of women, yet includes only five women out of the 58 leaders.

“It’s an honor to join so many outstanding leaders on this year’s Indiaspora Business Leaders list, each of whom is making a meaningful impact within their industry,” said Reshma Kewalramani, M.D., CEO and President of Vertex Pharmaceuticals.

“As a physician and CEO dedicated to creating transformative medicines that improve the lives of people with serious diseases, I believe deeply in the critical role a diverse and inclusive culture plays in being able to achieve that mission at Vertex.”

“We are committed to developing the next generation of leaders from all backgrounds, and I look forward to some of those names showing up on this list and others like it in the years to come,” she said.