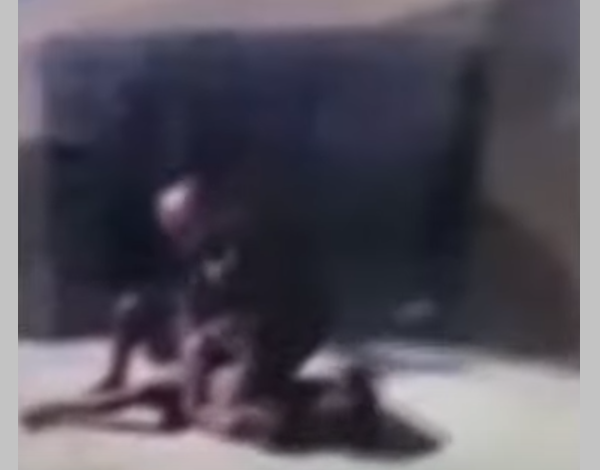 A video clip of a police officer putting his knee on an Indian origin man’s head and neck during arrest in a small town in New York has sparked outrage among human rights activists and the community.

The arrest of Yugeshwar Gaindarpersaud in the manner George Floyd, a black man who was killed under the knee of a White policeman on May 25, sparking nationwide protests has brought forth widespread condemnation.

Newly released body camera footage shows Patrolman Brian Pommer putting his knee on a man’s head and neck after the man runs from him and resists arrest in Schenectady, 145 miles north of New York City, on Monday.

Gaindarpersaud, said the officer was “smashing my head to the concrete,” CNN reported citing its affiliate Spectrum News Albany. “I couldn’t move, I couldn’t do nothing.”

Gaindarpersaud said he sustained injuries from the encounter and passed out in the back of the squad car, according to the news outlet.

An internal probe by the city Police Department is ongoing, but may be completed as early as Friday, said Mayor Gary McCarthy, according to the local Daily Gazette.

An initial 23-second clip shot by Gaindarpersaud’s father and posted to social media Monday sparked instant outrage and a protest outside city police headquarters, where the Gaindarpersauds spoke and addressed a crowd of roughly 100 people.

Schenectady NAACP and the county Human Rights Commission echoed calls for an investigation and questioned why city police continued to use such tactics despite the prolonged national discussion over police brutality and use of excessive force.

“The mere fact that we have to continue to speak on this issue, after new legislation signed by Gov. Andrew Cuomo and an executive order signed by Mayor Gary McCarthy to ban chokeholds of any kind, is completely unacceptable,” said Omar McGill, acting chairman of the county Human Rights Commission, as cited by the Gazette.

Democratic US House member Paul Tonko also questioned the police methods saying, “It is impossible to build trust with this kind of violence ongoing, especially for those peace officers who do serve and protect with integrity.”

“We need answers, those responsible need to be held accountable,” Tonko tweeted.

CNN citing police said Pommer was dispatched to Brandywine Avenue for a report of a vehicle that had its tires slashed.

The complainant alleged that a male neighbor had damaged his tires as part of an ongoing dispute between them and said he had video surveillance of the suspect, Gaindarpersaud, committing the crime.

On body camera video, which lasts just over five minutes, Pommer approaches Gaindarpersaud in the driveway of a home and tells him the neighbors have video of him slashing their tires, but they don’t want to press charges.

Gaindarpersaud tells Pommer he does not know what the officer is talking about and wants to see the video.

“Yes, let me talk to you, OK? We have it on camera, they don’t want to press charges right now.” Pommer says.

“I don’t care what they want to do because I don’t know what you talking about. So, bring that camera and show it to me. OK?” Gaindarpersaud responds.

“OK, turn around. Put your hands behind your back,” Pommer says while calling for back up on his radio.

“Put my hands for what?” Gaindarpersaud responds.

“Yep turn around, put your hands behind your back,” Pommer says.

At this point, Gaindarpersaud runs to the backyard of the home and Pommer runs after him. A struggle ensues when Pommer catches up to Gaindarpersaud.

The struggle continues. It isn’t clear what is happening but the officer pushes Gaindarpersaud toward the ground and tells him over and over to put his hands behind his back.

Then, Pommer puts his knee on Gaindarpersaud’s head and neck. Seconds later, it appears Pommer strikes Gaindarpersaud somewhere in his lower body because the camera shakes and the suspect says, “ow!”

Someone asks Pommer, “What did he do to you?” to which Pommer responds “Back up!” and keeps repeating that and “get back inside now!”

Pommer keeps his knee on Gaindarpersaud’s head and neck for at least 90 seconds, but his body camera falls to the ground during that time and it could be as long as about 2 minutes, at which time other officers arrive and help take him into custody.

Police said Gaindarpersaud resisted arrest and that the officer’s knee was only used to maintain control.

Gaindarpersaud was charged with criminal mischief and resisting arrest according to Spectrum News Albany.