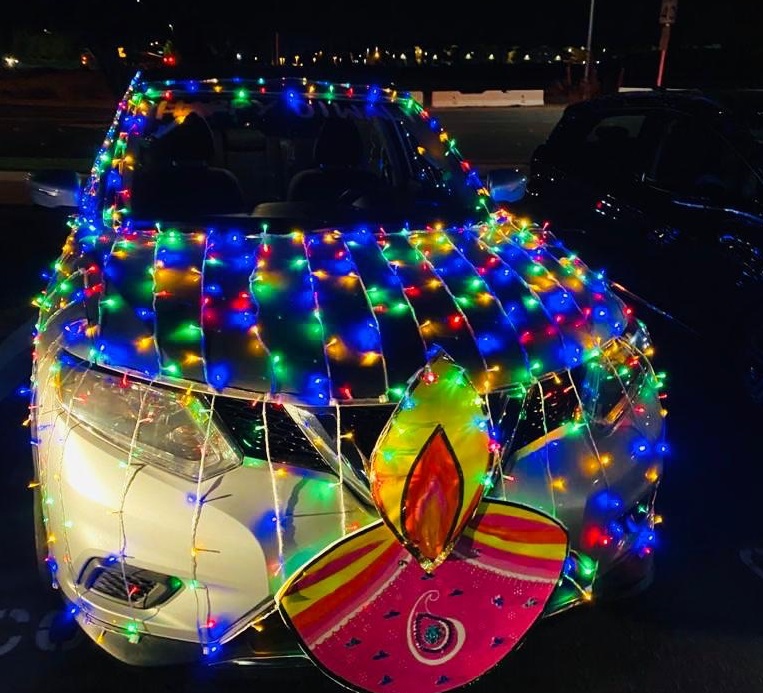 Festival of lights celebrated in ‘Quarantine Style’ amid covid pandemic.

Undeterred by the covid-19 pandemic, over 100 Indian Americans in Sacramento, California celebrated Diwali, the Indian festival of lights in ‘Quarantine Style’ with a parade of cars decorated with lights.

Celebrated under the auspices of Sacramento chapter of SEWA, a humanitarian, nonprofit service organization that originated in India, the parade in Roseville on Sunday attracted many from nearby suburbs.

People dressed in traditional Indian clothes, with children and family waving, cheering, showcased their cars with decorated lights depicting the spirit of the Diwali festivity, according to a media release.

Many local Americans also joined the parade. Some taking pictures at the starting point told the organizers that the decorations and lighting were so refreshing and certainly created a positive vibe.

Diwali, the Hindu Festival of Lights  is celebrated by Hindus, Sikhs, Buddhists (Indic tradition) alike and the festive spirit expressed by those of “any, all and no faith.”

Diwali symbolizes the spiritual “victory of light over darkness, good over evil and knowledge over ignorance,” the release noted. Light is a metaphor for knowledge and consciousness.

On this occasion, Sewa received more than 50 pounds of canned food donations through this Diwali food drive and donated the food collected to the local food bank.

For the first time, Diwali is celebrated at Washington Dulles International Airport (October 26, 2019)

Trump hosts Diwali at White House for second year in a row (November 14, 2018)

Ivanka Trump wishes Diwali to all Indians across the world (October 19, 2017)

US lawmakers greeted by overflow crowd of Indian Americans at Diwali celebration on Capitol Hill (November 17, 2018)