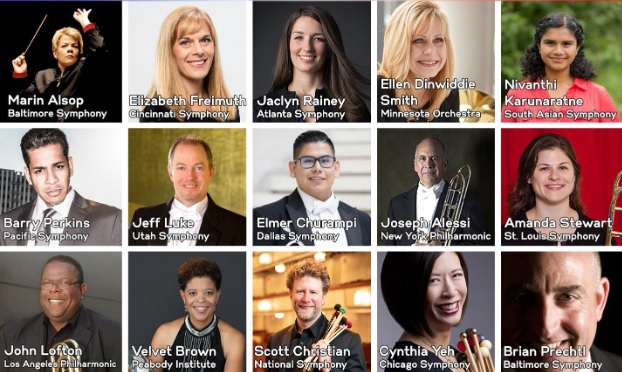 South Asian Symphony Orchestra’s Principal Horn Nivanthi Karunaratne is set to feature in the “Inauguration Fanfare for Joe and Kamala” on Tuesday in honor of President-elect Joe Biden and Vice President-elect Kamala Harris.

“Inauguration Fanfare for Joe and Kamala” is streaming on social media Tuesday, January 19 at 12pm EST simultaneously by 16 leading cultural institutions at https://www.classicalmovements.com/fanfare/ and https://youtu.be/KnyQkXwH3Vg

Aaron Copland’s iconic “Fanfare for the Common Man” celebrates the American people and in honor of Joe Biden and Joan Tower’s dynamic “Fanfare for the Uncommon Woman” for Kamala Harris, “our remarkable and uncommon” first woman Vice President.

In addition to footage of each  musician, recorded in their homes and on site  across the country, the presentation incorporates photographs and video illustrating “America the Beautiful” and the context of the struggle for civil rights and equality for  women in  the United States.

Classical Movement  has partnered with video and sound engineers Arts Laureate to produce these videos.

“I am elated to be able to finally celebrate our first female Vice President,” says Classical Movements Founder and President Neeta Helms.

“I am deeply inspired by Kamala Harris – and as an Indian-born American, I feel particular personal pride that her mother was

Indian and in her archetypically American background.”

“In this time of difficulty and hardship, it is also fitting that we celebrate Joe Biden, an example to us all for his ideals of decency and hope and his perseverance in the face of hardship and tragedy.’

Marin Alsop adds, “It’s a privilege to pay tribute to this new leadership team and celebrate this historic moment in America!”

“We are happy that Nivanthi Karunaratne who is a wonderful exemplar of our mission to promote peace and the understanding that bridges divisions, is a participant.”

“It is indeed a true privilege to give voice, through this ‘Fanfare for Joe and Kamala’, to our belief that music fosters love, forgiveness and compassion and that it touches the core of human existence,” adds Rao, former Indian foreign secretary and Indian ambassador to the United States.

Nivanthi Karunaratne comments, “I performed for then-Vice President Biden in 2015 and remember being struck by how warmly he treated the musicians; he mentioned the many personal tragedies he’s faced, and thanked us, saying “our favorite music gets us through those times.”

“It is an honor to be part of the Fanfares celebrating his Presidential Inauguration. As an American woman of Lankan descent, I also find it so exciting to have Kamala Harris, who shares South Asian heritage, as our new Vice President.

“The world is undergoing a reckoning; more and more, we rightfully acknowledge and uplift the contributions of BIPOC individuals and women. The same is true of Classical music,” says Karunaratne.

“This exhilarating project—featuring music by Joan Tower—reflects and celebrates that hard-won yet joyful progress,” she adds.