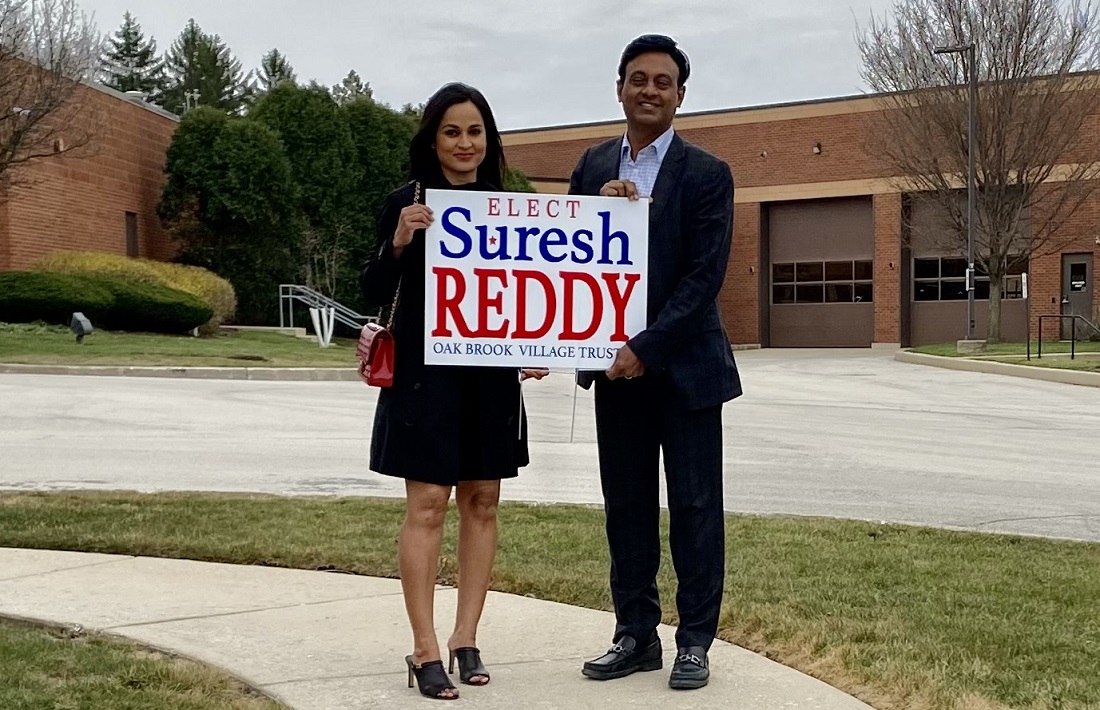 Hyderabad native picks up key endorsements, including that of mayor.

Dr. Suresh Reddy, immediate past president of American Association of Physicians of Indian Origin (AAPI), has picked up key endorsements as a candidate for a Trustee of Oak Brook, including that of the mayor.

Dr. Reddy is one of the six candidates for trustees for the three openings in the small Illinois town of nearly 10,000 people that goes to the polls on April 6.

“I am grateful to several key leaders of my hometown, Oak Brook,” said Dr. Reddy thanking his supporters ahead of the elections in the city about 15 miles west of the Chicago Loop.

Oak Brook Mayor Dr. Gopal Lalmalani and Trustee Moin Saiyed are among those who have endorsed Dr. Reddy’s candidacy saying his leadership skills will benefit the residents of the suburban town.

Dr. Reddy, who grew up in the suburbs of Hyderabad, Telengana, India, is a financial conservative, who always had a passion for “uniting and bringing people together,” according to a media release.

“It all started during my childhood with bringing neighborhood kids together to play ‘gully cricket’ and also bringing people together in college to organize  events, demonstrations, and educational tours,” he says.

“Bringing opposing parties to the table for resolving issues has always been my strength since my schooling days.”

Not being satisfied with his achievements as a physician and leader of the Diaspora Physicians group,  Dr. Reddy says, “I always had a strong passion for bringing a positive outlook and giving back to the community.

Dr. Reddy completed his advanced medical training at Beth Israel Deaconess Medical Center/Harvard Medical School and has stayed on Harvard Faculty for more than a decade.

After serving as Chief of Interventional Neuroradiology at Harvard, Dr. Reddy moved to the Chicago suburb. “Now that I call Oak Brook my home, I would like to contribute and serve my community by participating in public service,” he says.

“My mantra is: If you don’t lead, someone else will lead you,” says Dr. Reddy on what motivates him to take on yet another challenging role for the betterment of the community.

“If you don’t pick the right leader, the wrong leader will pick you, and as my good friend US Congressman Raja (Krishnamoorthi) says, and if you are not on the table, you will be on the menu,” he adds.

During the Covid pandemic, he facilitated more than a 100 webinars and health awareness events. He also facilitated honoring of more than 10,000 nurses who work selflessly in the line of duty against Covid in over 100 hospitals in over 40 states including Alaska.

“We would like to continue and strengthen many programs and services the city offers to all sections of the people.” Dr Reddy says committing himself to ensure that Oak Brook lives up to its name as a model village.

“More than ever, fiscal conservatism and wise spending, has become the most important attribute for a financially secure future,” he says seeking “a chance to perform my public service with utmost integrity and dignity to the office.”

His wife Leela, who was born and raised in Greenville, South Carolina was previously a Director of Network Health Boston, a HMO Health Plan in Boston.

Their son, Rohun is currently doing his MBA and JD at Kellogg School of Management and Pritzker School of Law at Northwestern University.