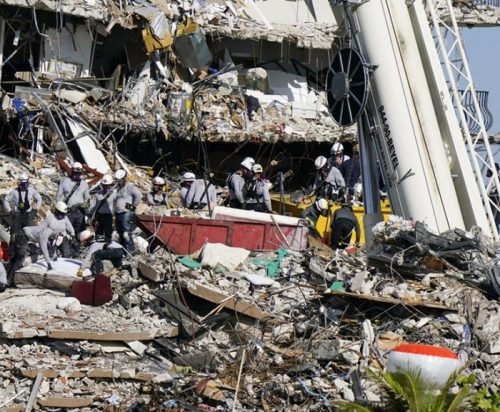 Pregnant mother Bhavna, husband Vishal and their daughter Aishani were inside when the building collapsed.

As rescuers search through the debris of a deadly South Florida condo collapse for a sixth day Tuesday, there is still no word about the fate of an Indian American family among the missing.

At least 11 people have died in the partial collapse of 12-story Champlain Towers South in the beachfront community of Surfside, and 150 remain missing following the tragedy last Thursday.

More than 136 people have been accounted for, according to Miami-Dade Mayor Daniella Levine Cava. The deceased range in age from 26 to 82.

Among the missing is Vishal Patel, his wife Bhavna Patel, and their 1-year-old daughter Aishani Patel. Bhavna Patel is four-months pregnant, according to their niece Sarina Patel.

“We’re starting to prepare for the negative possibility, especially as the hours pass, but at the end of the day our family is very hopeful,” Patel was quoted as saying by ABC7 Tuesday.

“I just keep praying they have found a pocket somewhere where they were able to seek shelter and just waiting to be found.”

“We tried calling their cell phone, I tried texting them things like that, but as time passed it became scarier,” she said. “You just kind of start to understand like they’re somewhere in that rubble.”

Search crew say they are not giving up, using canines and sonar to sweep the massive pile of concrete for any signs of life, according to ABC7. Rescuers have battled heavy smoke and fires deep inside the debris.

“We’re so blessed that they were able to extinguish the fire today. God forbid they didn’t and it spread to where all those cars were in that parking lot — it would have exploded,” Sarina said.

The Patels moved into the complex two years ago. Sarina says they knew nothing about the growing questions over the building’s structural integrity.

In a structural field service report from 2018, engineers pointed out the evidence of flooding, cracking, corrosion ‘major structural damage’ in the collapsed building.

Sarina Patel says growing up, her uncle lived with her family in Chino Hills.

She had just spoken to him last Sunday to wish him a happy Father’s Day and tell him she had booked a ticket to come see his new home, and to finally meet her niece.

“I had actually called them to tell them I had just booked a flight to come visit because they’ve been asking me to come see their home and to meet their daughter. I haven’t met her due to the pandemic.”

Her family knows the recovery process is delicate and dangerous, but they say they wish there was a faster way to get the answers they are so desperate to find.

“If they said they wanted volunteers, I would be on a plane and I would go start helping. Anything to make it go faster,” Sarina said. “Miracles do happen. Just praying we will be able to be part of that.”

They were home at the time the collapse took place, Patel told CNN. “We have tried calling them countless of times and there’s just been no answers, text messages, nothing,” she said. “They haven’t contacted anybody.”

Vishal’s sister Pooja and his cousin, Robin, have also travelled across the country to wait for news about the family.

At 8.30pm the night before the building collapse, Robin had a video call with them.

“I hadn’t seen Aishani in a couple of weeks, so for almost 45 minutes we spoke,” he told Sky News. “Vishal had just begun a new employment opportunity so I was speaking to him about how that was going.”

“Aishani had just started to grow her first set of bottom teeth, her preference for teething was actually the stick from a xylophone toy. And Bhavna was pregnant so we were talking about that and arranging a family reunion,” he told Sky News.

Umma Kannayan, a family friend of the Patels told BBC that they were a “very loving” family who were closely involved in their religious community. “Aishani was like the little baby of the temple,” she said. “It feels like you’ve lost a part of yourself.”

Kannayan said she was waiting with the Patel family’s relatives for news, but that “not much information has been shared” about the victims.