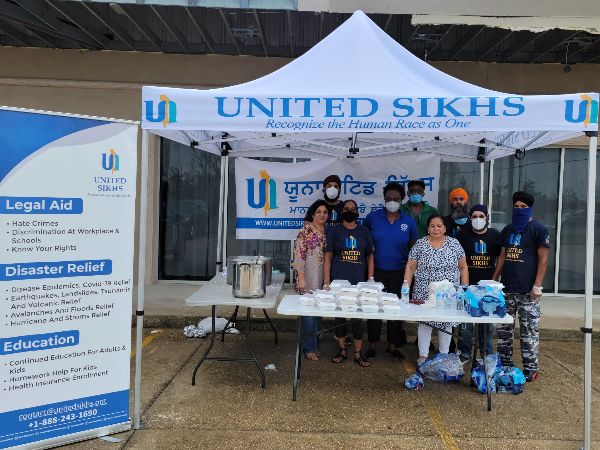 “We are excited to partner with the HungerMitao movement to fight hunger across the United States,” said Gurpreet Singh, CEO of United Sikhs. “This allows us to execute the Sikh ethos of putting others before oneself to an even greater degree.”

“HungerMitao is focused on unifying the resources and efforts of the four million strong Indian diaspora around the issue of hunger in the US, thereby affecting transformational change in our adopted land.” said Raj G. Asava, co-founder HungerMitao in a media release.

“Contributing toward unfulfilled needs in the communities we live in, is critical for us to properly integrate. That is exactly what HungerMitao has set out to achieve,” he added.

“HungerMitao supports and strengthens the work of the Feeding America network because of the efficiency, reach, reliability and urgency with which the network serves the food insecure,” said Anna Asava, co-founder HungerMitao.

“Hunger comes several times a day, every day. So, people need to have a reliable source they can access as they pull their lives together and get back on their feet. We are thankful to food banks across the US for providing sustained support to our neighbors facing hunger.”

HungerMitao movement, which celebrated its fourth anniversary Wednesday, has enabled close to 40 million meals for the Feeding America network of food banks since its launch in 2017, the release said.

Additionally, United Sikhs in conjunction with its ground partners in the same time frame has served approximately 35 million cooked meals and shelf-stable food across the US utilizing the infrastructure and strength of the Sikh community in particular.

“Both models amplify the spirit of selfless service and believe in volunteering in addition to giving their voice and resources to help the hungry, regardless of political, religious, or ethnic backgrounds,” the release said.

“No one in our communities should be food insecure,” said Manka Dhingra Washington State’s Indian American senator. “HungerMitao and United Sikhs have each been lifelines for so many people, and now together they can have an even greater impact in their quest to end hunger.”

“The Sikh value of Seva, spirit of selfless service, is the perfect partnership with HungerMitao to feed many more people by engaging the Indian American community so we can lead with our values of helping the most vulnerable,” she said.

United Sikhs has established an office to support the local community in Laplace, where over one million people lost electricity and have been displaced.

HungerMitao has announced a matching challenge (https://tinyurl.com/FeedingAmerica-HMM-2021) to raise funds for Second Harvest Food Bank, Central Food Bank of New Jersey, and Food Bank for New York City, all of whom were impacted by hurricane Ida.

Since inception in 1999, United Sikhs a global organization with chapters in 11 countries, has provided services in every major natural or man-made disasters in the world and has carried out humanitarian projects in over 40 countries with over 6,500 volunteers globally.

A launch is planned in Michigan on Oct 19 and one in New Jersey before the end of first Quarter 2022. It has also shared the model with the Chinese American community in North Texas and mentored them towards the launch of the ‘NiHao’ (How are you?) movement.

The movement has crossed US borders and is helping the food challenged in Canada through the Feeding Canada network of Food Banks, he said.

A passionate group of 162 volunteers from TCS raised thousands of pounds of food and distributed it to 13 food banks across Canada during the HungerMitao Month of August.

“Anna and I remain committed to the mission and vision of HungerMitao and look forward to collaborating and helping Feeding America and the food banks towards a hunger free America,” he said.