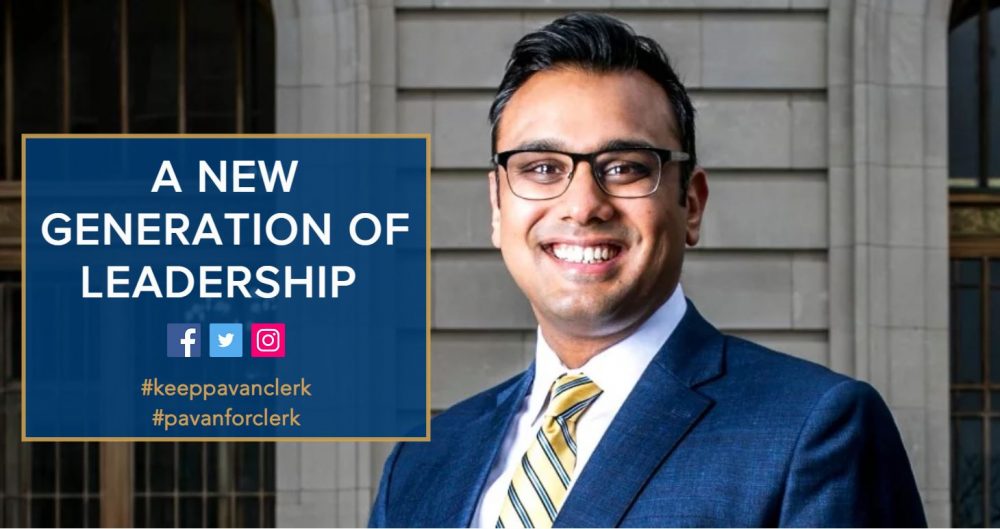 With Aftab Pureval set to become Cincinnati’s first Indian American mayor on Tuesday, Pavan Parikh, another attorney of Indian descent has been chosen to succeed him as Hamilton County Clerk of Courts.

Democrat Parikh, a former judicial candidate and a judge advocate in the Army Reserve, was unanimously chosen for the job by the Democratic Central Committee on Dec 29, Cincinnati Enquirer reported.

Fellow democrat Pureval, 38, the son of a Tibetan mother and an Indian father, who won the election in Nov 2021, will create history Jan 4 as Cincinnati’s the first Asian-American Pacific Islander (AAPI) mayor.

Parikh was chosen because he “is well known in the courthouse, knows the legal system and can win re-election and keep the seat Democratic,” Hamilton County Chairwoman Gwen McFarlin was quoted as saying.

“He is serious about this position,” she said. “He is not using this position as a stepping stone for higher ground.”

The Hamilton County Clerk of Court’s duties include maintaining all the court records, overseeing courthouse security for municipal court and processing traffic tickets and passport applications.

When a vacancy occurs in a countywide office, the officeholder’s political party can choose the person to fill the vacancy until an election can be held, the Enquirer said.

Parikh rallied the crowd after being sworn in.

Born and raised in Cincinnati, Parikh is a graduate of Princeton High School, Xavier University, and the Saint Louis University School of Law, according to his bio on pavanforjudge.com. He began his legal career in Cincinnati working at the courthouse under Judge Nadine Allen.

His passion for public service also led him to work as a political staffer on issues of voting rights and the judiciary before being appointed the chief legal counsel for the Ohio Senate Minority Caucus, according to his bio.

At the statehouse, the Indian American attorney was responsible for monitoring and negotiating legislation on issues from criminal justice reform to voting rights, constitutional law, and ethics.

As an adjunct professor at the University of Cincinnati College of Law and at Xavier University, Parikh volunteers his time to mentor and educate the next generation of Cincinnati’s leaders.

He is a Barrister member of the Potter Stewart Inn of Court, a Board member of the Asian Pacific American Bar Association of Southwest Ohio, the vice-chair of the Cincinnati Bar Association’s Veterans and Military Law Committee, and is a regular volunteer with the Ohio Center for Law Related Education.

“… the Hamilton county democrats appointed a world-class leader and servant to fill my seat as clerk of courts. Pavan Parikh has the character, experience, and resolve to expand access to justice and bring our courthouse to new heights. It’ll be my honour to partner with you,” Pureval tweeted.

“In the last few election cycles, the voters have spoken that they wanted change at the courthouse. Under Aftab’s leadership, we have seen how critical the clerk is to achieving meaningful reform,” Parikh, told Spectrum News after his appointment.

“I believe that I can be of strong service to Hamilton county in this role having worked at the courthouse and leaning on my years of experience as an attorney, Army officer, business executive, educator and civic leader. I look forward to helping make our justice system work better for all of the people of Hamilton county.”