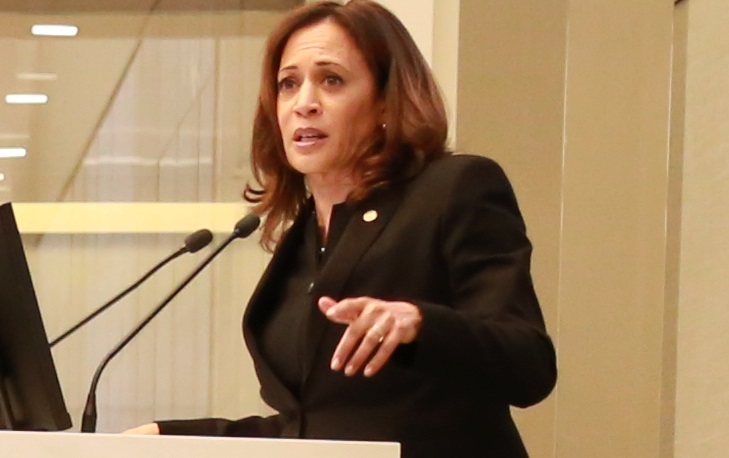 Indian American VP says ‘what was at stake then, and now, is the right to have our future decided by by we, the people’

Likening the Jan 6, 2021 assault on the US Capitol by supporters of defeated President Donald Trump to Pearl Harbor and 9/11, Vice President Kamala Harris has called for vigilance to keep democracy safe.

“What was at stake then, and now, is the right to have our future decided the way the Constitution prescribes it: by we, the people — all the people,” said the Indian American leader in a speech Thursday marking the Jan 6 anniversary of the Capitol riots.

“Certain dates echo throughout history, including dates that instantly remind all who have lived through them — where they were and what they were doing when our democracy came under assault,” said Harris, who was in the Capitol that day as a US senator.

“On that day, I was not only Vice President-elect, I was also a United States senator,” Harris recalled. “And I was here at the Capitol that morning, at a classified hearing with fellow members of the Senate Intelligence Committee. Hours later, the gates of the Capitol were breached.”

“I had left. But my thoughts immediately turned not only to my colleagues, but to my staff, who had been forced to seek refuge in our office, converting filing cabinets into barricades,” Harris said.

Read: US lawmakers discuss riots in India on the eve of Lok Sabha elections (April 4, 2014)

“What the extremists who roamed these halls targeted was not only the lives of elected leaders. What they sought to degrade and destroy was not only a building, hallowed as it is.”

“What they were assaulting were the institutions, the values, the ideals that generations of Americans have marched, picketed, and shed blood to establish and defend,” Harris said.

“On January 6th, we all saw what our nation would look like if the forces who seek to dismantle our democracy are successful. The lawlessness, the violence, the chaos” she said.

“What was at stake then, and now, is the right to have our future decided the way the Constitution prescribes it: by we, the people — all the people,” Harris said.

January 6th reflects the dual nature of democracy — its fragility and its strength,” she said. “You see, the strength of democracy is the rule of law.”

“And the fragility of democracy is this: that if we are not vigilant, if we do not defend it, democracy simply will not stand; it will falter and fail,” Harris said.

“The violent assault that took place here, the very fact of how close we came to an election overturned — that reflects the fragility of democracy,” she said.

“Yet, the resolve I saw in our elected leaders when I returned to the Senate chamber that night — their resolve not to yield but to certify the election; their loyalty not to party or person but to the Constitution of the United States — that reflects its strength,” she said.

Speaking after Harris, President Joe Biden without naming Donald Trump accused his predecessor of having “created and spread a web of lies about the 2020 election.”

The day a year ago marked the first time in history that a former president tried to prevent the peaceful transfer of power, he said. “The former president was preemptively sowing doubt about the election results,” he said.

“He built his lie over months. It wasn’t based on the facts. He was just looking for an excuse, a pretext to cover for the truth. He’s not just the former president. He’s a defeated former president.”

Some House lawmakers recalled the horror of realizing that violent rioters had breached the Capitol wall. Some said they feared they would be hurt or killed in the melee, NPR reported,

Indian American Rep Pramila Jayapal, a Democrat who had had her knee replaced and was using a cane at the time of the insurrection, recalled strategizing how she could use her cane or a gas mask as a weapon if she were threatened by rioters.

“Just returned to the House Gallery for the first time since I was hiding on the ground, crawling under banisters to seek safety, and preparing to fight back with my gas mask and cane as insurrectionists pounded on the doors,” she tweeted. “Those powerful memories are with me every single day.”

“January 6th, 2021 is a day that I will never forget,” Jayapal wrote. “But as we rebuild and fight for our democracy, I’m incredibly grateful to have the support of the other members who were trapped in the gallery with me.”

Indian American lawmaker Raja Krishnamoorthi recalled in a statement that he “was evacuated from my office after the Capitol Police discovered a bomb 200 feet from my office window.”

Read: Kamala Harris compares January 6 to Pearl Harbor and 9/11 in anniversary speech at the Capitol (January 6, 2022)

“Following the horrors of that afternoon, after the National Guard arrived to secure the Capitol, I joined my colleagues in crossing the broken glass and wreckage that filled the halls of Congress to return to the House floor to certify the election and fulfill our Constitutional duty.”

“There can be no compromise with those who would seek to overthrow our republic. There can be no reconciliation, he wrote demanding “those who attacked our Capitol must be held accountable.”