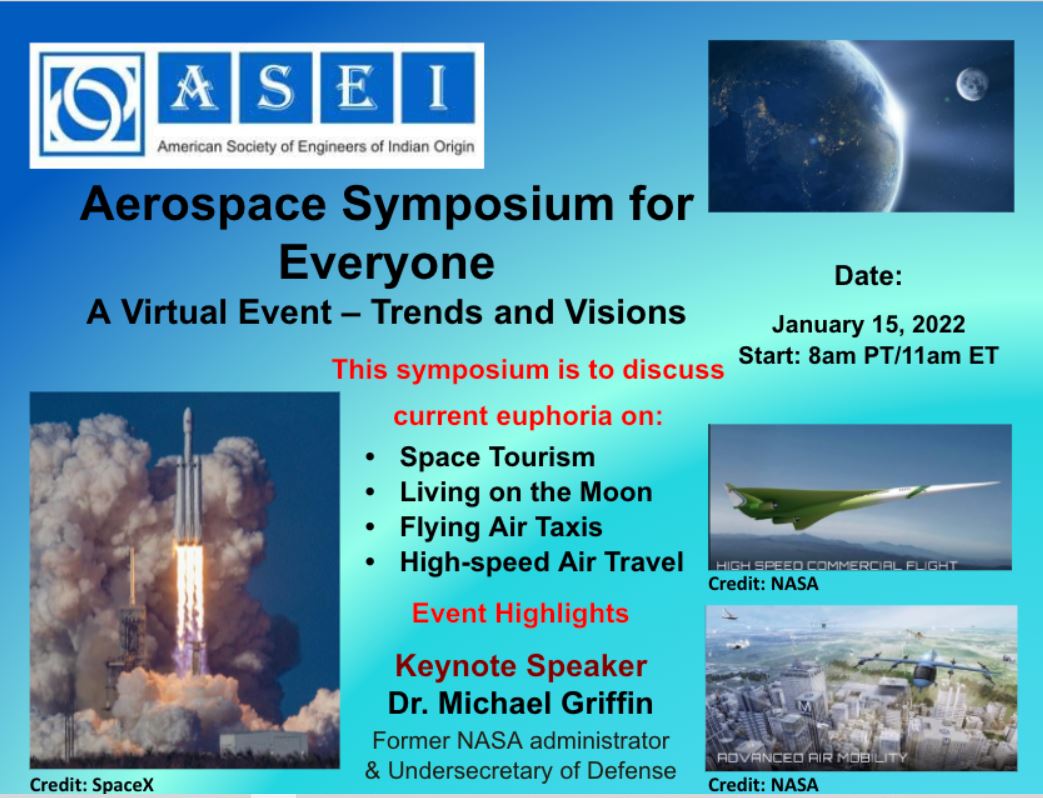 Fasten your seatbelts for a high speed flight into the future at an “Aerospace symposium for Everyone”, being organized by the American Society of Engineers of Indian Origin (ASEI) on Jan 15.

To be keynoted by Dr. Michael Griffin, former Administrator of NASA and former Undersecretary of Defense, the symposium at 8 am PT/11 am ET, will also have NASA’s current Indian American Associate Administrator for Technology, Policy and Strategy, Dr. Bhavya Lal.

Four panels on High-Speed Air Travel, Living on the Moon, Space Access & Tourism, and Flying Air Taxis promise to be equally interesting to both the scientific community and the general public.

For registration and sponsorship: www.aseiusa.org

The first session on ‘High-Speed Air Travel’ moderated by Dr. Bala Bharadvaj will discuss the prospect of flying across the Pacific in only four hours or cross the Atlantic in half the time the modern subsonic jets take!

Over six decades of research on supersonic commercial aircraft design have paved the way for a new era in high-speed travel that is not too far from becoming a reality.

The grounding of the Anglo-French Concorde has perhaps spurred even more of an urgency to bring the next supersonic aircraft to the market.

Several aerospace companies have been at the forefront in the design and development of supersonic transport and business jet aircraft that will fly above the speed of sound and carry as many as 90 passengers.

Dr. Bhavya Lal and Dr. Ajay Kothari, President Astrox Corp will be among the speakers discussing how it would be like ‘Living on the Moon’.

This panel will explore getting most efficiently and cheaply to the Moon and also establishing settlements on Moon, this time not just to visit and plant a flag, but also to live and work there.

It will also explore how to mine for the most important, life sustaining water-ice on Moon, as well as exploring the lava tubes for habitats.

In just a few decades, a thousand or more people are expected to live on the Moon at a time, with many hundreds rotating every few months, so as to avoid long-term impact of smaller gravity.

With the advent of reusable rockets, the paradigm has shifted to be able to do this much cheaper than earlier. The panel will discuss how to give a third dimension to a continued evolution, which is an expanding presence in Space.

Cheaper and more frequent Space access as offered by Rocket Lab and Astra have helped humanity benefit from Space by their launches of smaller satellites to near Earth orbits, thus helping improve life on Earth.

For sub-orbital tourism, Blue Origin and Virgin Galactic have recently taken passengers to Space and back. SpaceX of Elon Musk have also inspired us all with its orbital flight for passengers using Falcon 9 and Crew Dragon capsule in Flight Inspiration-4.

The orbital tourism will also be extended to tourism on Moon in coming years. All of them promise to be multi tens of billion dollars business over next two decades.

All these developments of late are what dreams can be made of now. With the advent and successful deployment of reusable rockets, these dreams will be in the grasp of many in the coming decade.

Dr. Naveed Hussain, CTO Boeing and Dr. Anita Sengupta CEO founder, Hydroplane among others will discuss the modalities of ‘Flying Air Taxis’ as this dream is very close to being a reality.

In a matter of only a few years from now, a large number of aviation and auto companies are expected to launch their air taxi operations in major metropolitan cities around the world to connect urban centers to bypass the high traffic congestion.

The business potential for air taxis is expected to grow to $1.5 trillion by 2040. All of this is possible now because of new and emerging technologies, including new batteries, autonomous operations, and advanced manufacturing.

This also provides exciting opportunities for future generation engineers and scientists. In this panel, experts and corporate executives will discuss how flying air taxis are expected to revolutionize urban air transportation.