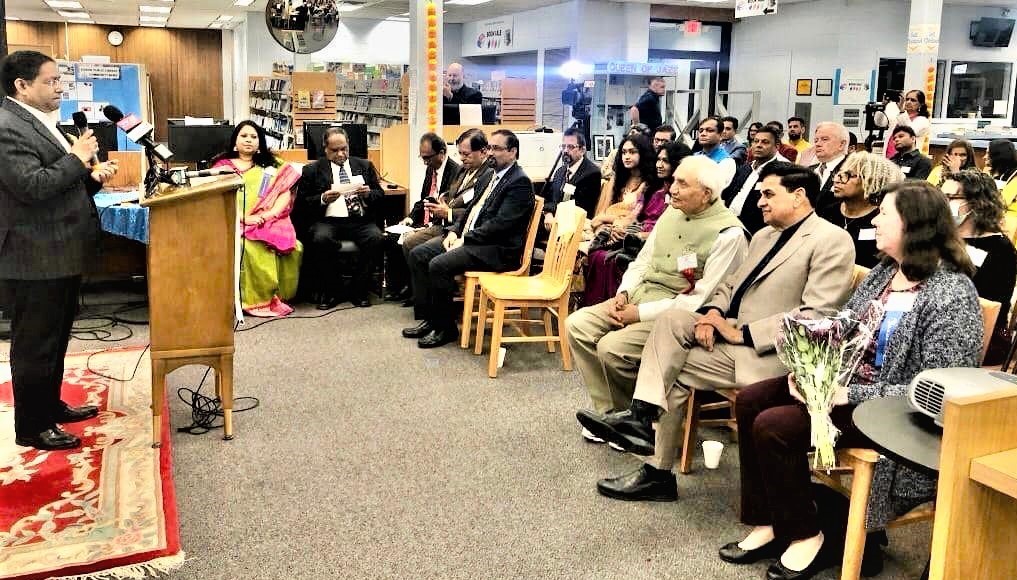 Several Indian community organizations donated more than 200 books to the Edison Library in New Jersey to launch an India collection of books to be made available thru Middlesex County’s public libraries.

The library hosted the “India Collection Launch” event on Sunday in partnership with the Indian Consulate and Global Organization of People of Indian origin Edison New Jersey Chapter (GOPIO-Edison).

The grand sponsor of the program was Sabinsa Corporation, a food supplement company located in East Windsor with operations in India.

The Indian Consul General Randhir Kumar Jaiswal was the chief guest along with Consul for Community Affairs A.K. Vijayakrishnan.

After a prayer song by GOPIO-Edison President Pallavi Belwariar, a moment of silence was observed for the victims of Russia’s war in Ukraine and for the passing away of GOPIO-Life Member and community leader Yash Paul Soi early this month.

Library Director Allan Kleiman said he was very excited by this collection and told that these books can be issued to anyone in the Middlesex County.

He then introduced Library President Patricia Massey who welcomed availability of classic India related books and Indian language books from the library.

GOPIO International Chairman Dr. Thomas Abraham who initiated the effort told the audience that Indian Americans have done extremely well professionally, politically and financially, and that community should do more for the larger society.

In this regards, GOPIO-Connecticut chapter successfully launched India Collection of books at the Norwalk, Connecticut and Stamford, Connecticut libraries. These included several classics and Indian language books in Hindi, Urdu, Gujarati, Assamese and other languages.

Edison and nearby towns in New Jersey have one of the largest concentration of Indian Americans, Abraham noted. GOPIO has joined hands with the Indian Consulate in New York to launch India Collection of Books at Edison Public Library to serve the Indian community as well as to make a better understanding of India to the local population, he said.

Jaiswal spoke about the vibrant library system in America that helps spread knowledge and make it a developed country. He said that American Indian partnership is crucial for world peace and security and lauded the efforts of Diaspora in getting this initiative to Edison.

He said that the libraries in USA are the best in the world and making the Indian books available thru this system will help Diaspora with the availability of rare Indian books.

GOPIO Vice President Ram Gadhvi, who is also chairman of the Gujarati Literary Academy, contributed over 60 Gujarati books in this initiative.

Libraries, he said would not be outdated in spite of digitalization and that many new Indian immigrants feel comfortable reading a hard copy of the book.

Edison Councilman Ajay Patil said that he had been wanting this for the last four years and thanked everyone involved in getting this initiative to its fruition.

GOPIO is collecting old Indian classic books and contemporary books in all Indian languages from the community to donate to other libraries. Those who want to donate may contact GOPIO at 203-329-8010 or send an e-mail to gopio@optonline.net